Another good day of riding here in the Usumbara mountains, as we made our way from a Mkuzi to Rangwi Convent. Today, the roads were bigger which meant more traffic and larger, busier villages. It also meant a bit of an improvement in the roads, although still far from smooth pavement.

The first section was very bumpy, with a small, smoother trail on the very edge. It was a fine line between smoother trail and loose gravel though, sometimes changing abruptly between the two. This resulted in a couple of people getting a bit of road rash as their tires slid out from underneath them. Everyone is okay and were soon back on their bikes, but the remainder of the ride was done a lot more cautiously.

We also had a few mechanical issues as one of the guides got a flat tire and one person’s seat bolt sheared off, resulting in a short ride into the next village using the rear rack as a seat. Luckily, the next village was a bit larger and we were able to repair both issues there.

The market was going on in town, which meant a busy, busy place. I don’t think I’ll ever be able to adequately describe the atmosphere, sounds and smells of a Tanzanian market. And it’s difficult to get a good photo of one with so many people not wanting their photo taken.

In terms of terrain today, there were definitely another few good, long hills to be climbed. We’ve learned that a description of “rolling terrain” or “a bit up and a bit down” means there are going to be some big, long hills. Just like distances quoted are an estimate not to be taken as truth (so far usually shorter than what we were told though) and “halfway there” actually means almost there. There was definitely some more beautiful scenery to take in today too. I especially love it when the roads wind around a valley and you can see it from way across the valley… the red clay roads standing out from the lush green vegetation.

One of the highlights of the day for me came towards the end with two different groups of kids. As we pass through each village, kids always come running towards us to witness these crazy foreigners on their bikes, to wave and say “jambo!” (hello) as we ride by. They seem to be able to spot us from a mile away! If we stop in a village, it’s not long before we have a large crowd of kids (and often adults too) staring at us. One of our guides explained to us that the locals really don’t understand why we’re riding our bicycles. He also explained to us that in Tanzanian culture, girls and women are not allowed to ride bicycles. In any case, we garner a lot of attention anywhere we go.

Near the end of the day, at the top of a hill, we stopped to rest and to regroup in some shade in a small village. The shade was under a large tree where a group of elderly men sat on a long wooden bench they’d made. They didn’t seem to mind us joining them and, as most Tanzanians we’ve met along the way, most were very friendly and welcoming. Soon a group of boys was gathered there as well, watching us closely. As with many groups of kids, we wondered if it would be okay to take a photo of them. At first a few said no, but then a few others said yes and soon after most of the kids were posing for photos for all of us and loving it when we showed the photos back to them on our cameras. Here’s one of them posing and then another with John and Carole showing them some photos. Note the large knife in one boys hand… even young kids often carry knives here!

Just before we arrived at the convent we’re staying in tonight, we came across a group of school kids. While a few girls enthusiastically posed for some photos, a boy practiced his English with Max, then requested he sing a song. When Max was done singing (a song I’m not familiar with), I asked the group of school kids to sing a song for us. One girl soon started singing “if you’re happy and you know it” and soon all the kids and all of us were singing along.

I think that those are some of the moments and experiences that I’ll remember from this trip for many years to come. 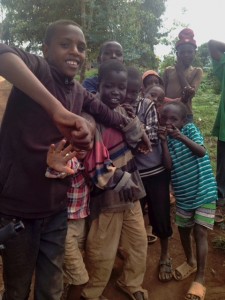 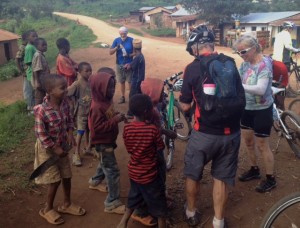