Determined. That’s the only word to describe the attitude of the twelve cyclists who tackled ten days of riding the southern Rockies in withering temperatures. Undeterred by daily Environment Canada warnings to limit outside activities, the gang circled from Fort Steele, BC north through mountain passes leading to Johnston Canyon, AB, through the foothills in Alberta then back to BC via Crowsnest Pass. Each day ended with the work of setting up camp and cooking. 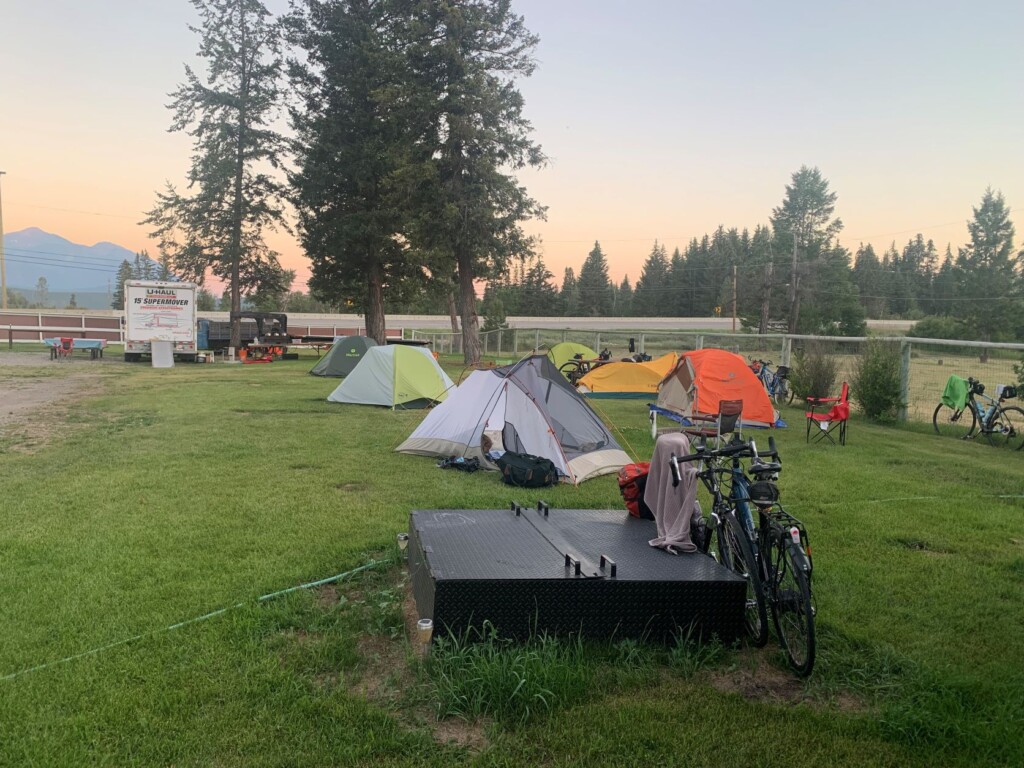 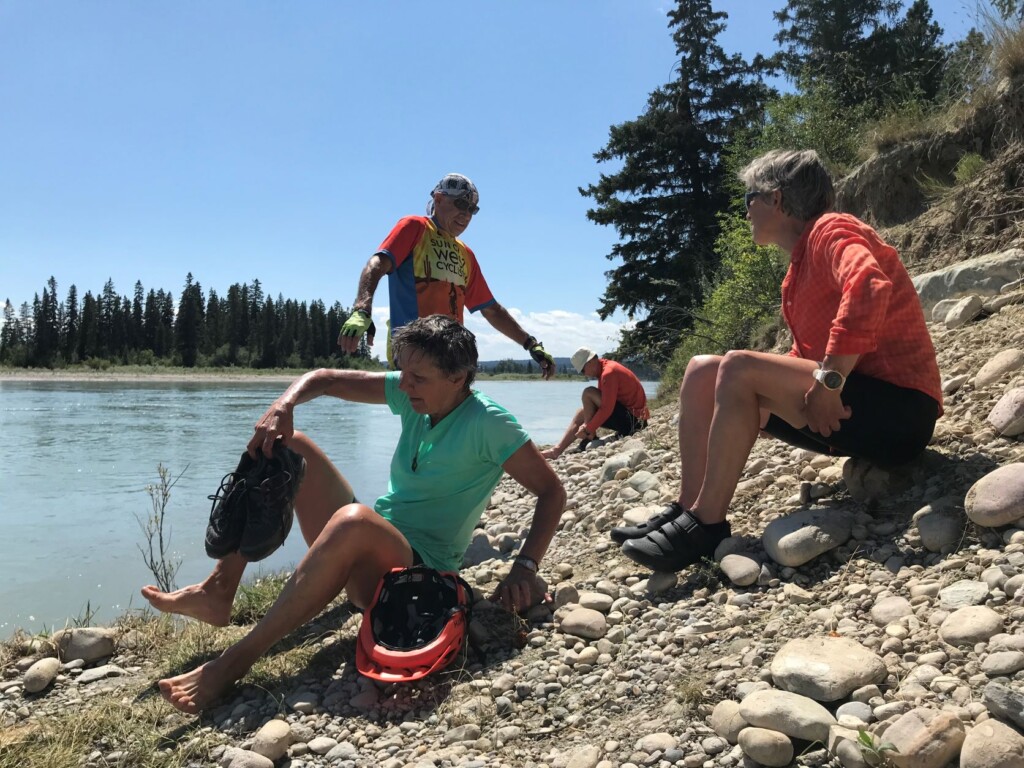 The support vehicle, a 15’ UHaul truck, was commandeered by teams of two, who shopped for the meal they would prepare that evening as well as topping up breakfast and lunch supplies. Critically, this team generally stayed ahead of the riders, stopping at regular intervals to offer coffee, treats, packed lunches, and much needed refills of water. Not a trip for the faint of heart and yet so doable in the company of steady riders. Leadership by trip leader Doris Maron underpinned its overall success!

The riding began with everyone struggling a bit initially after long drives from as far away as Vancouver Island to trip start. Once the legs warmed up, it was, generally, a hot and fast ride. The standout feature was the fully paved rail trail from Cranbrook to Kimberley. After Kimberley, the Rockies teased us with glimpses of what was to come. At the Skookumchuk motel and RV park, several riders enjoyed a cooling (read freezing) wade in the Kootenay River. 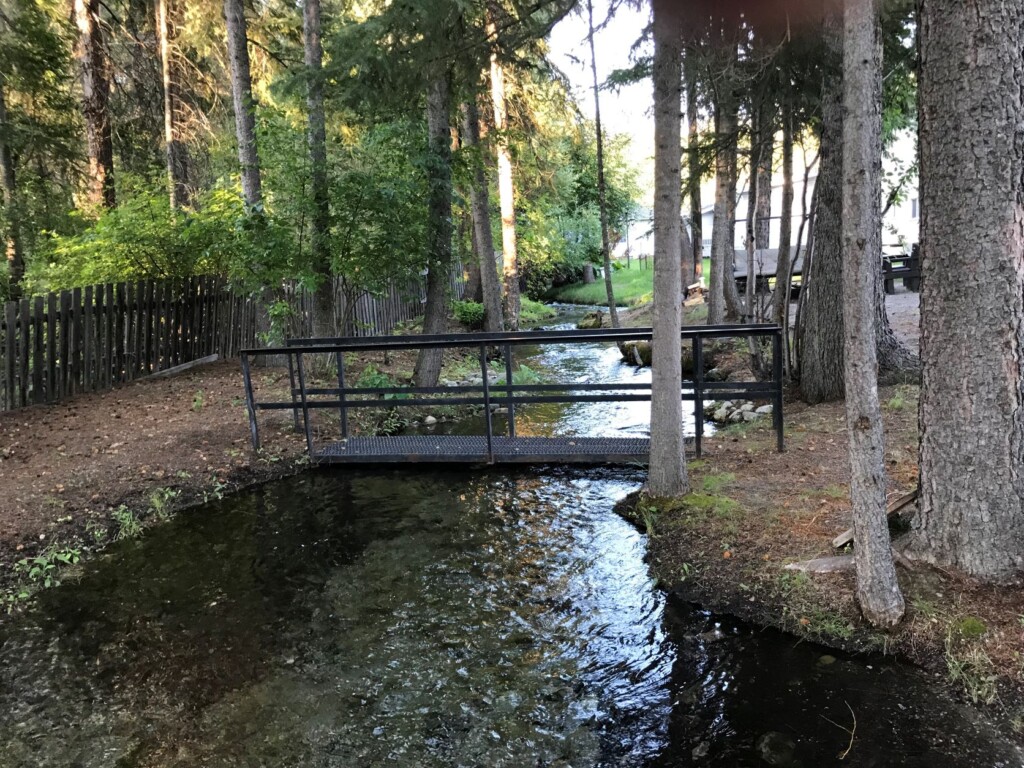 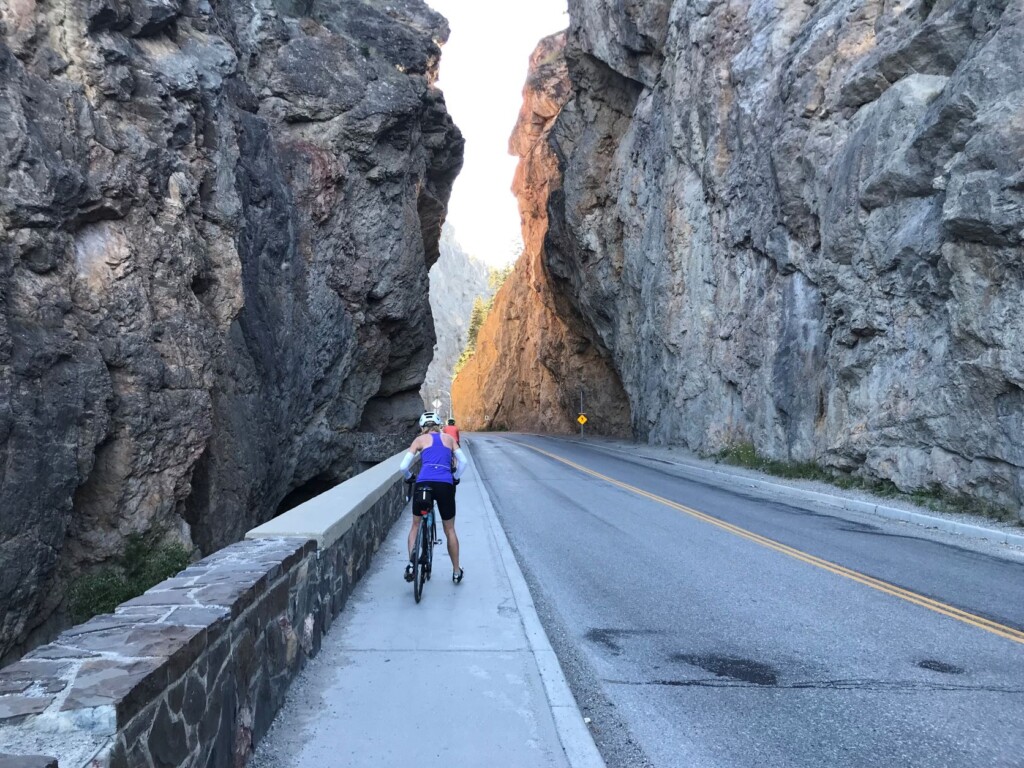 Heading north along Kootenay highway (BC 93N/BC 95N) offered views of valleys, pine trees, pastureland, hoodoos, the Purcell Mountain range to the west and the Rockies to the east – all baked brown by the scorching sun. Long, straight stretches on wide shoulders were broken up with the Columbia Valley and other cycling trails. By Invermere the heat was upon the riders – the forecasted 35C. The two-kilometre climb to the campground was a grunt. Cold beer never tasted so good! 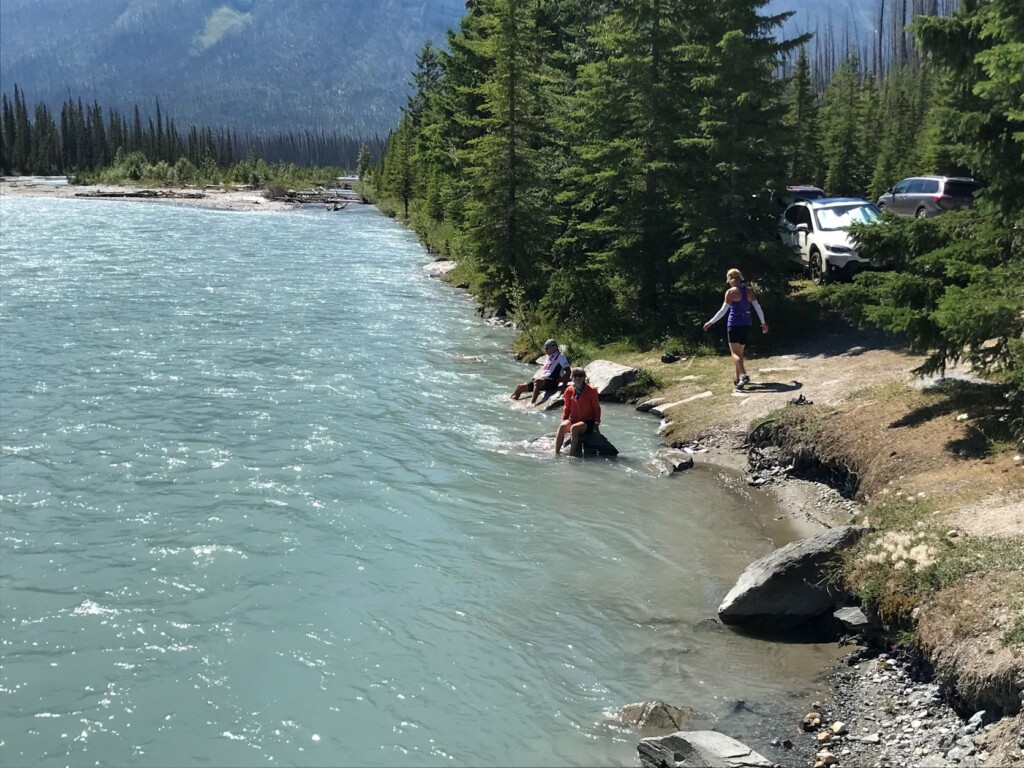 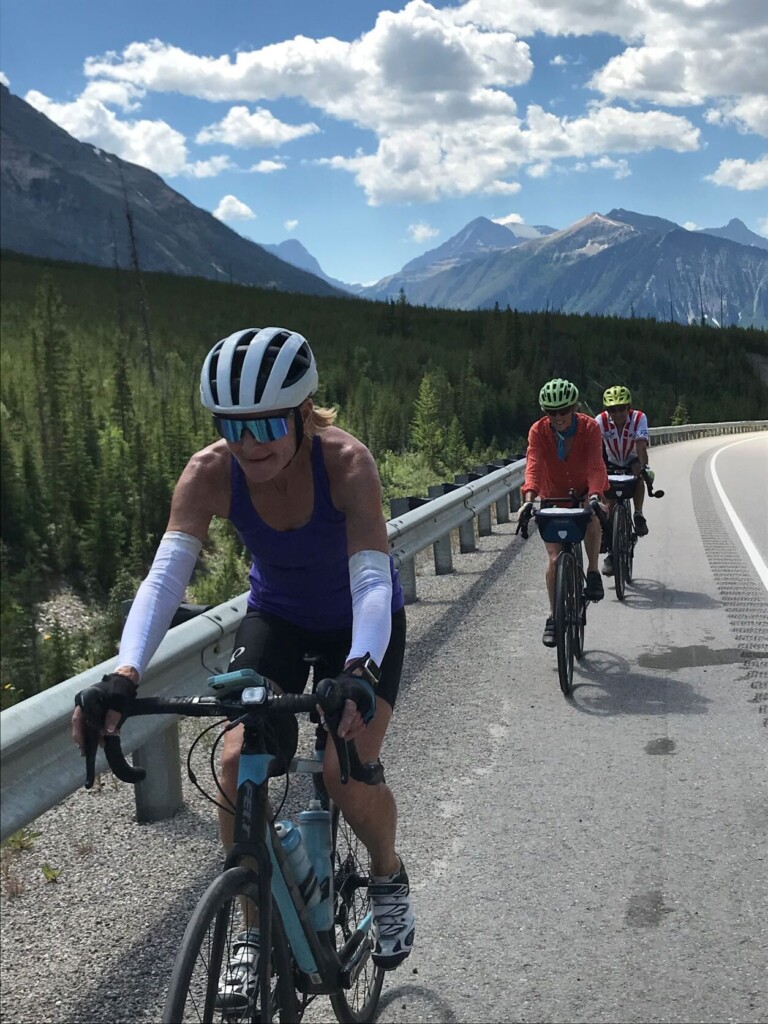 Climb Out of Sinclair Canyon

Yes, the elevation gains were significant and the heat unrelenting. The reward? What goes up must come down! Cruising down for endless kilometres offered some reprieve from the heat. And then there were stunning mountain views at each turn in the road. Despite riding all day on a significant highway, the wide shoulders provided some sense of security and lots of room to stop and take pictures. And beaconing in the distance – the face of Johnston Canyon. 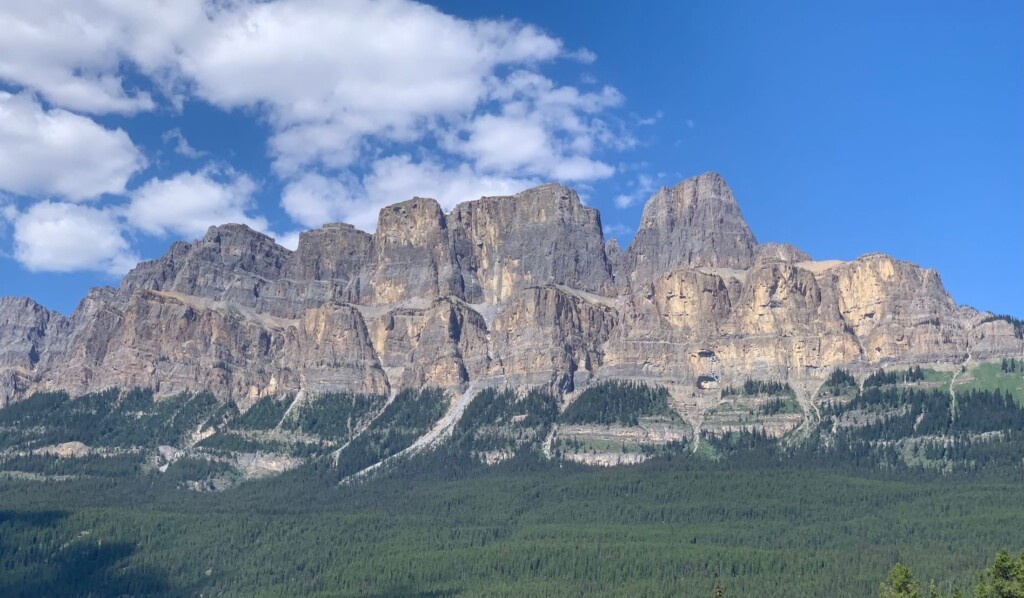 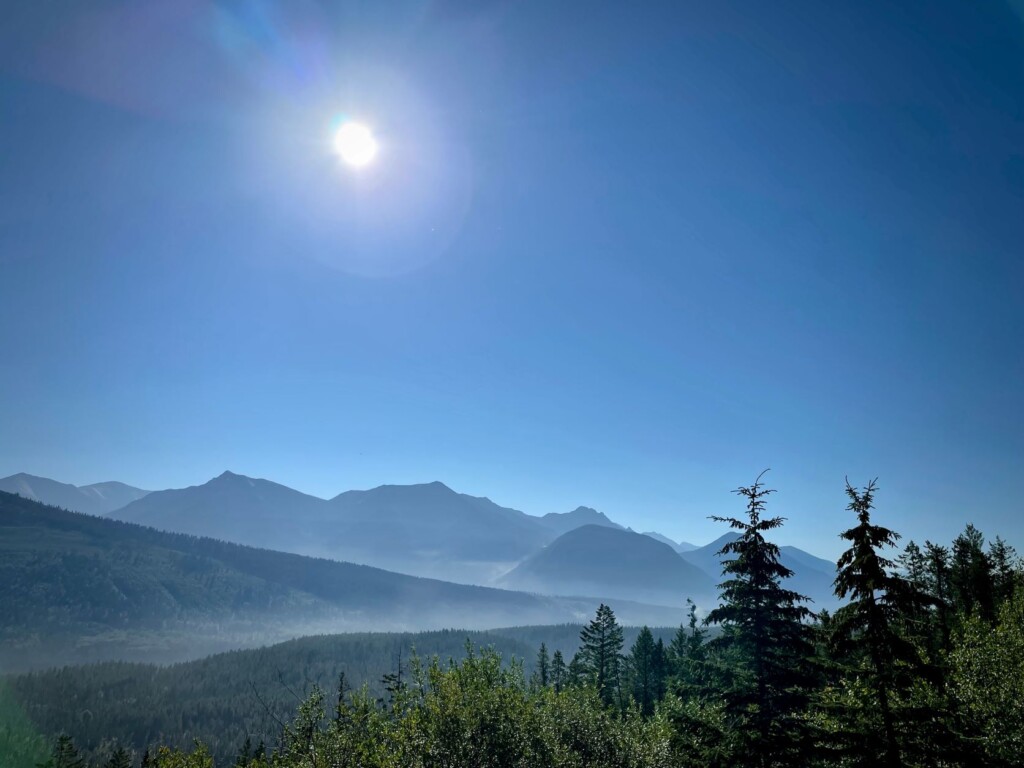 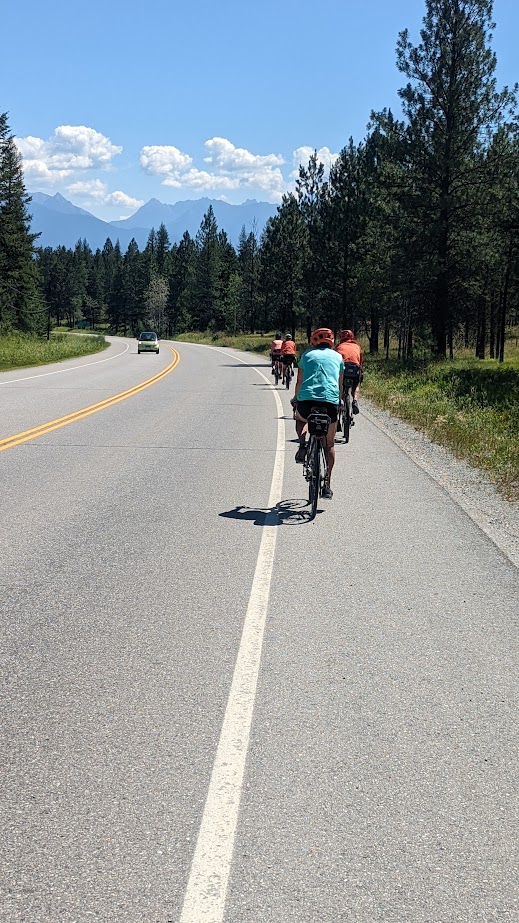 Varied. Descending from Johnston Canyon to Banff and subsequently to Canmore offered riders the chance to fuel up in restaurants rather than eating off the back of the support vehicle. And be amid people! Much of the ride was on trails – a welcome change from highway shoulders. Still, again, the heat, finally gathering enough energy to create a thunderstorm and some much welcome rain. “Camping” in the Exshaw community hall provided a dry end to the day. 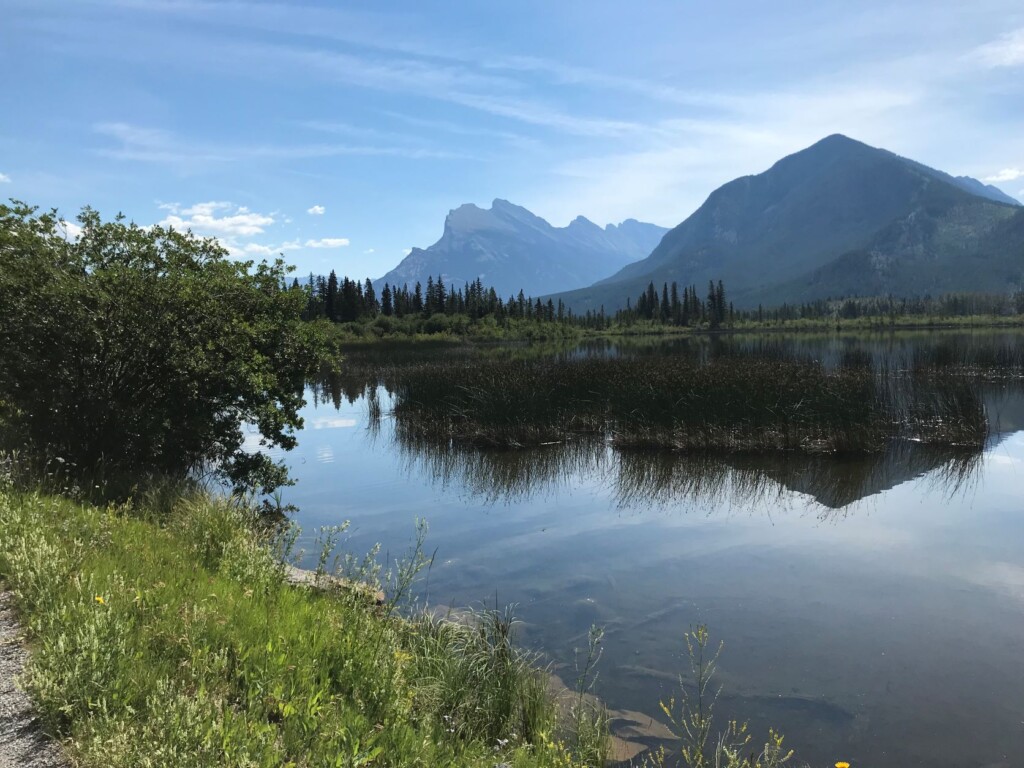 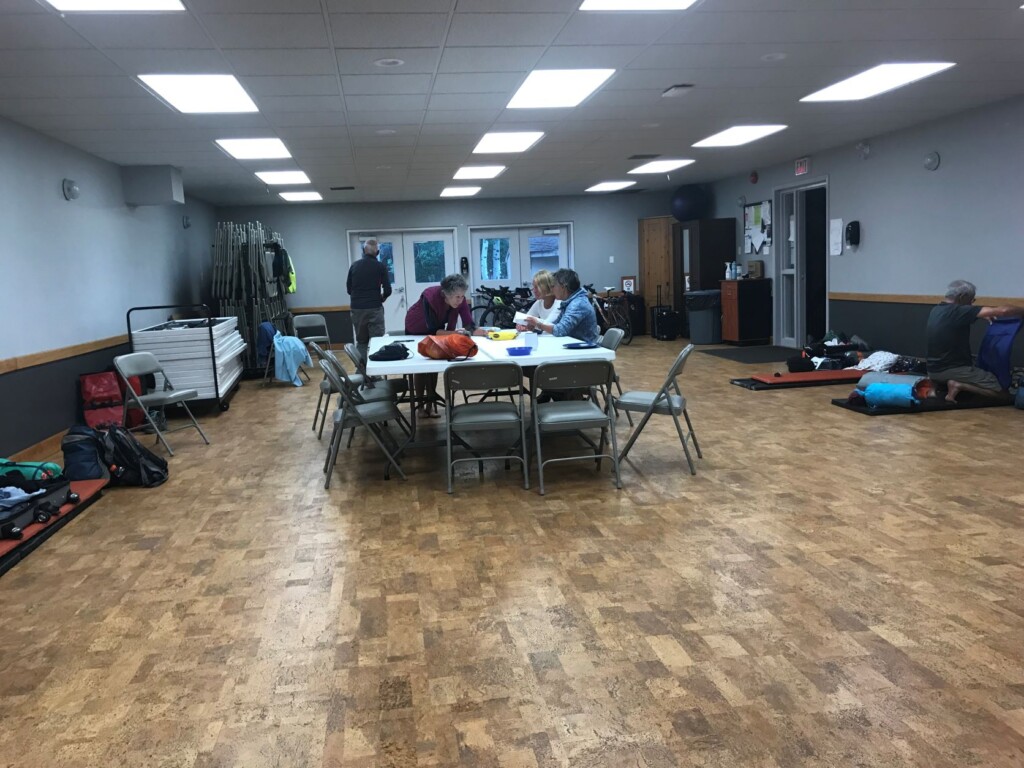 Leaving the mountains behind opened vistas of rolling hills and ranch land. Ghost Lake, fed by the Bow River, was used by some to cool off before pushing to Cochrane. Most of the ride was on the Bow Valley Trail (AB-1A E) however a few cyclists detoured deeper into the surrounding area, adding gravel portions on township and range roads. The final five km climb to our AirBnB deterred everyone from hopping onto their bikes on our subsequent rest day.

After a welcome day of rest, cyclists saddled up to resume the journey. The ever-changing rolling fields provided eye-candy as we travelled on roads popular with cyclists and specialty cars from Calgary and area. An area where owners of Jaguars, Porsches and other makes put the pedal to the floor. End of day found us at the Okotoks Lions campground on the banks of the Sheep River with just enough flow to lie down and have the cool waters lower body temperatures. 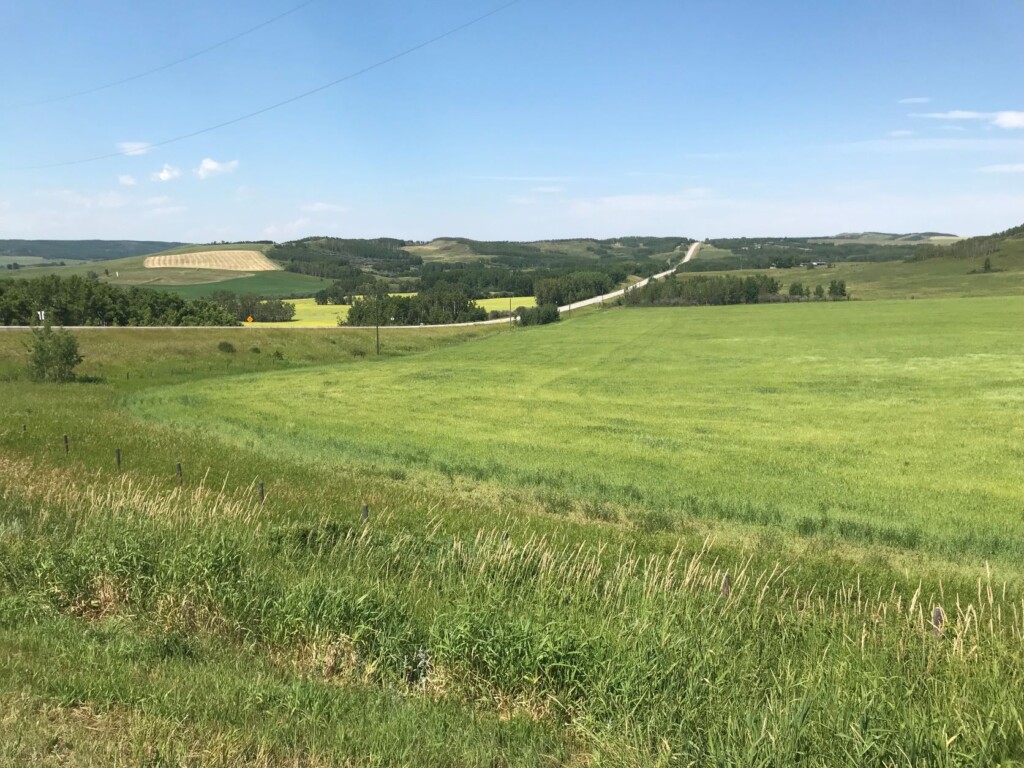 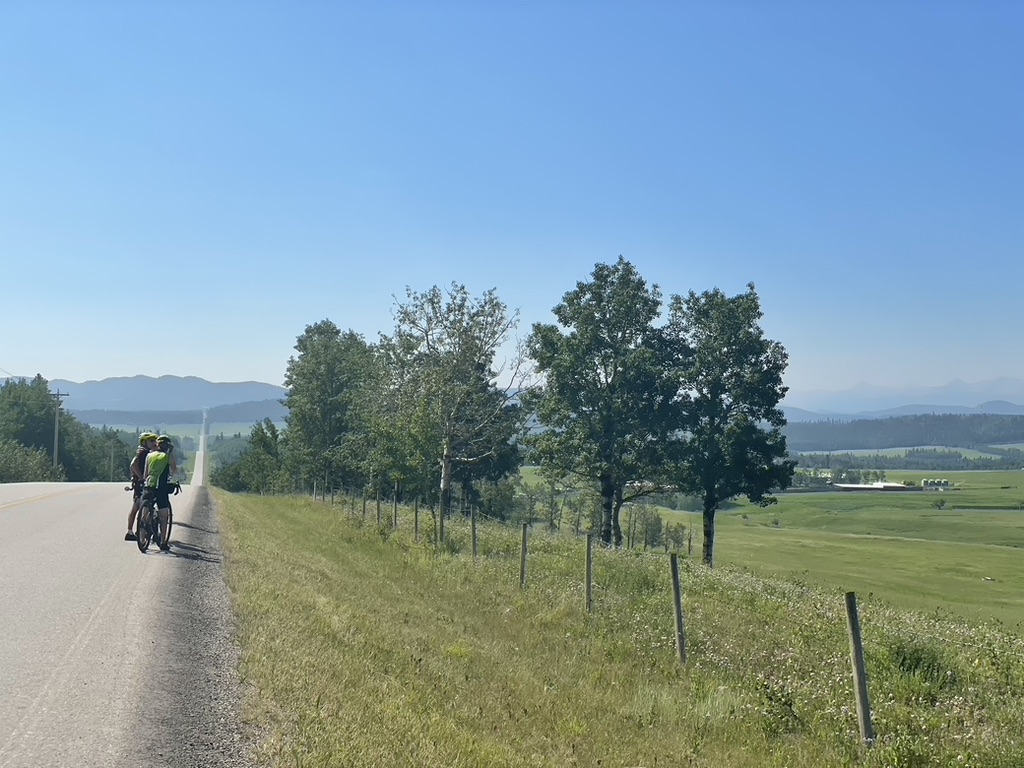 For geology fans, the Okotoks erratic (Big Rock), offered a close-up view of a hunk of rock that moved from the mountains to pastureland sometime after the last ice age. Otherwise, this day was spent on the Cowboy Trail (AB 22), known for its crosswinds, and marked with high wind advisory signs, triggered at the 80 km/h mark! Fortunately, no wind mishaps this day. Instead, a cool swim at Chain Lakes (no showers) and a large communal cooking building were a nice change at day’s end.

A long day on the Cowboy Trail (AB22) and a taste for the famous winds of the area. The route continued through rolling pastureland and, still, the heat challenged riders. Towards the end of the day both Lundbreck Falls and the Leitch Colleries (the only Canadian owned and operated coal mine in Crowsnest Pass in 1907) offered points of interest for the curious and exhausted as did overlapping scalloped shaped clouds.

The day started with a ring side view of the Frank slide of 1903, Canada’s largest and deadliest. The signature piece of the day, however, was the wind. Today, winds on the nose literally stopped us in our tracks. For some, it took our wheels out from under us. With gusts over 70 km/h our pace slowed to 10 km/h. On the plus side, once in BC, riders enjoyed a long downhill into Fernie. At the Fernie RV resort we had end of trip celebrations in advance of our last day on the road. 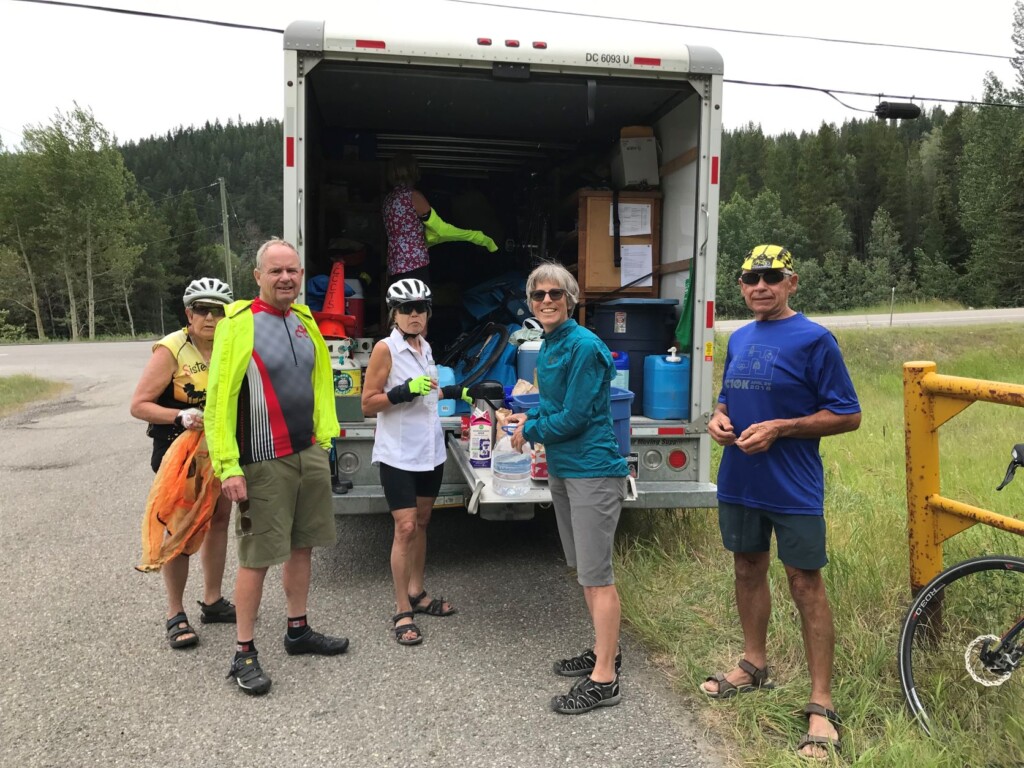 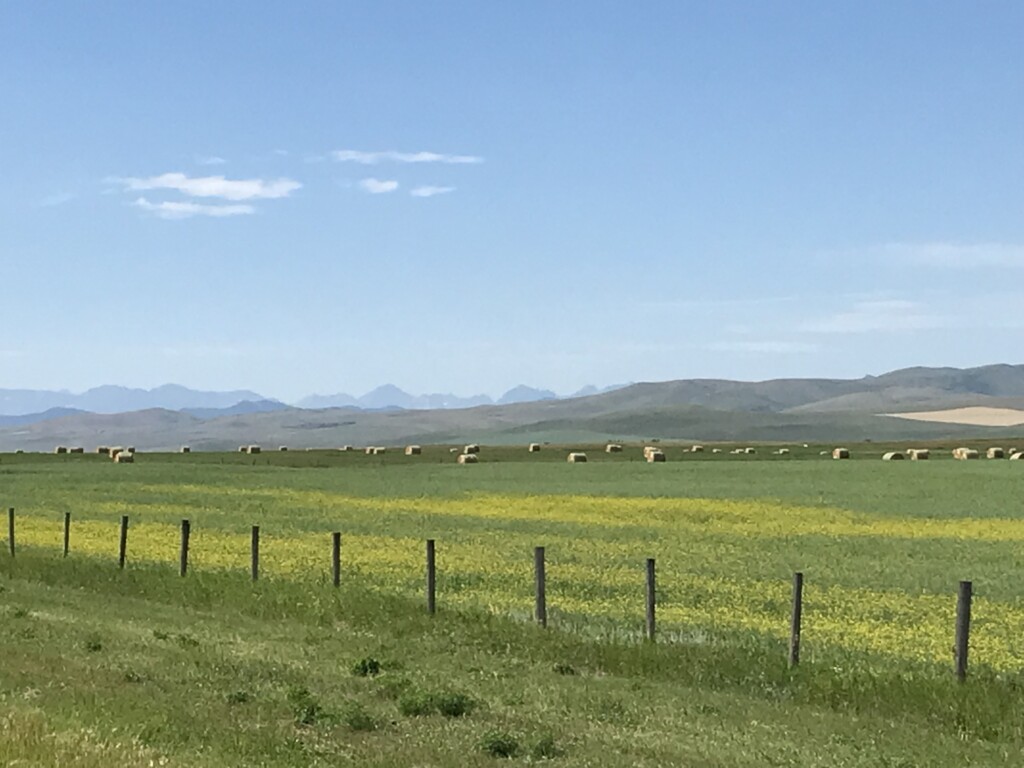 Glimpses of the Foothills

It was a cool (cold!) morning leaving Fernie. With no wind and an elevation drop of 100 m, the first 30 km flew by. As the day got hotter the Kootenay River valley opened before us. For the last 30 km of the tour the Wardner Fort Steele Road, offered a quiet backroad where riders slowed to enjoy the scenery and the wildlife, some side tripping to Norbury Lake to dip toes into cool crystal-clear water.

This last 30 kms of the trip was one of the many highlights and was a great finish to the tour. 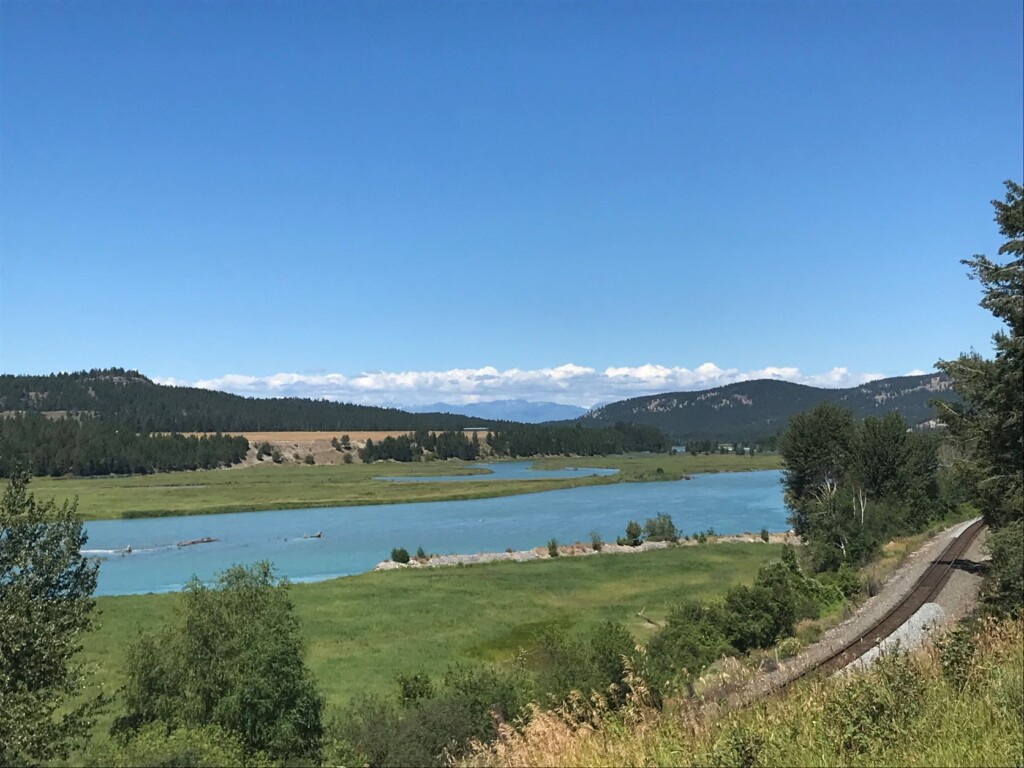