One of the many train stations found along the P’tit Train du Nord (The Little Train of the North). 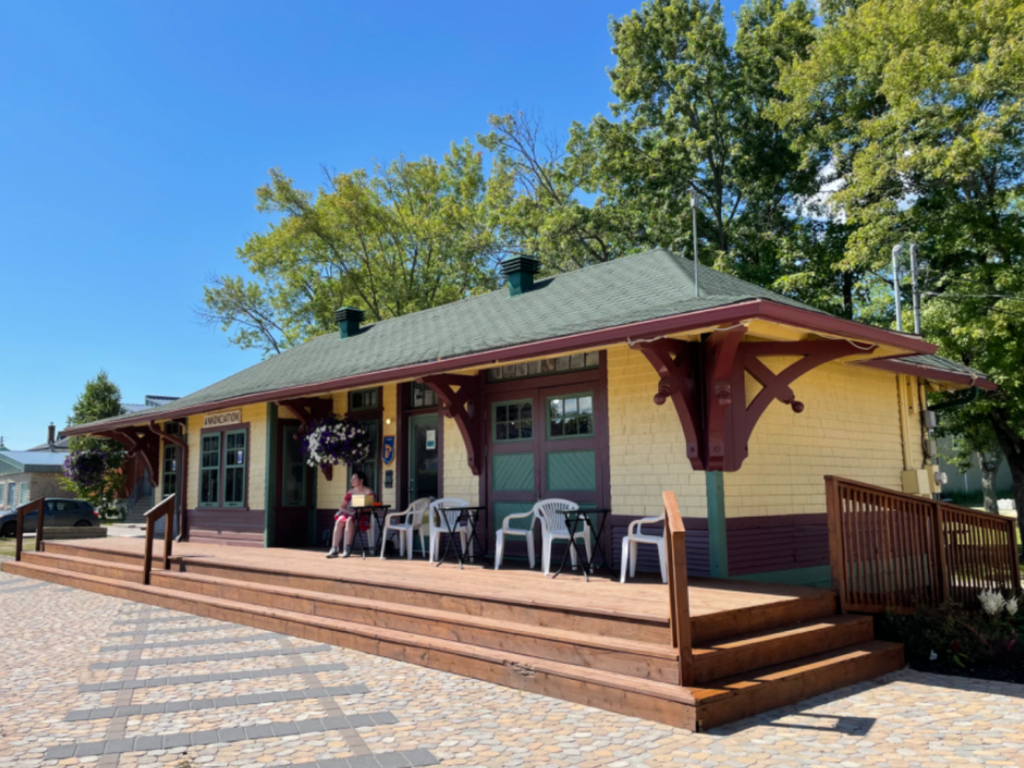 What an amazing trip Geoffrey Kennedy and Marg Hurley, organized for 18 avid cyclists who wanted to discover the wonders of this beautiful Québécois region: The Laurentians including both the hilly country roads and the famous P’tit Train du Nord .

Off on the P’tit Train du Nord 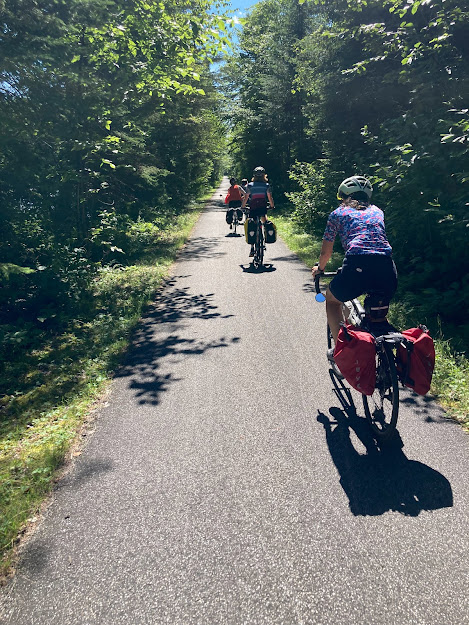 Intimately connected to the history of the Laurentians, the old railroad bed of the P’tit Train du Nord became, in 1996, a 234 km bike path surrounded by breathtaking nature, sprinkled with welcoming villages and picturesque train stations. 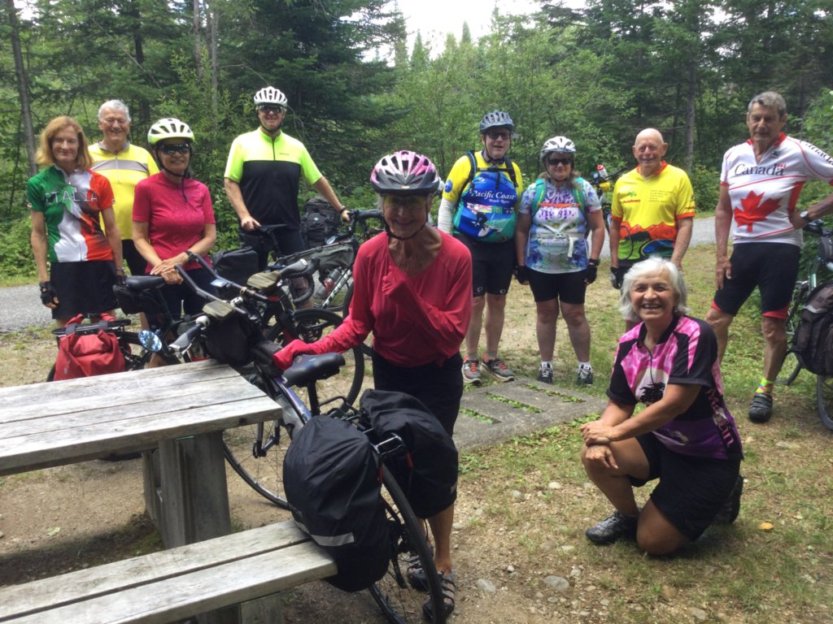 On July 25th, we all met in Mont-Laurier, most of us driving from Ottawa. Our National Capital Chapter had the pleasure of welcoming three new friends: Robin and Dan from Seattle and Kim from Vancouver. The skies were ominous that first day but, being troopers, we still cycled the short ride to La Ferme Rouge and the long ride to Mont Saint-Michel. 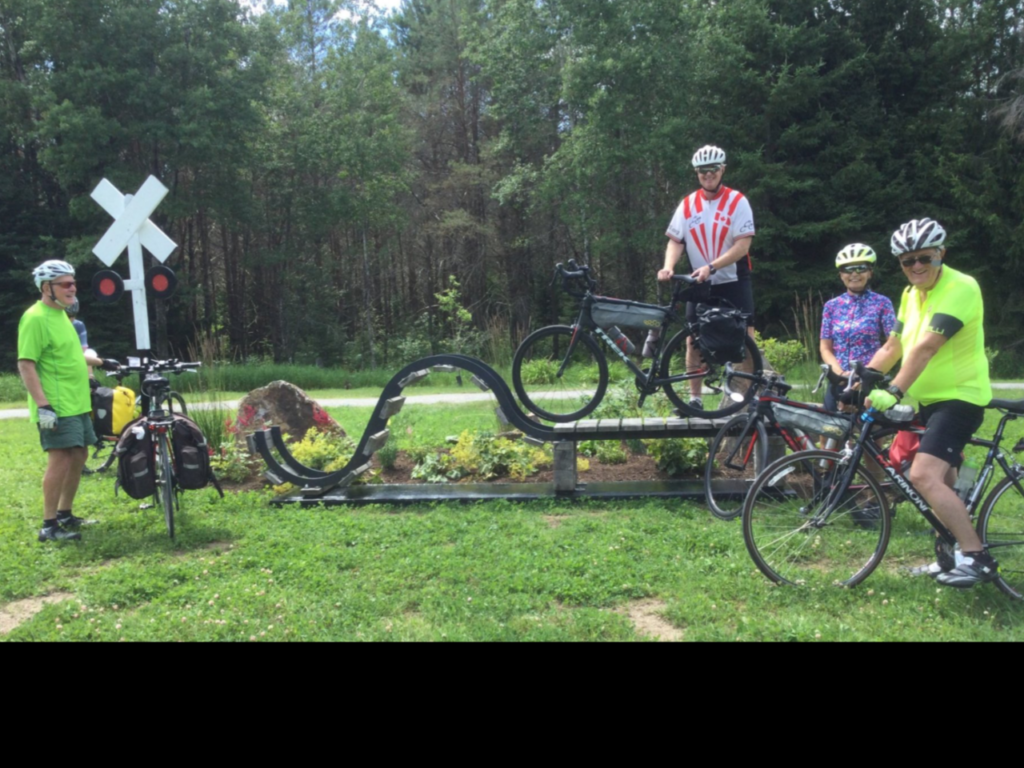 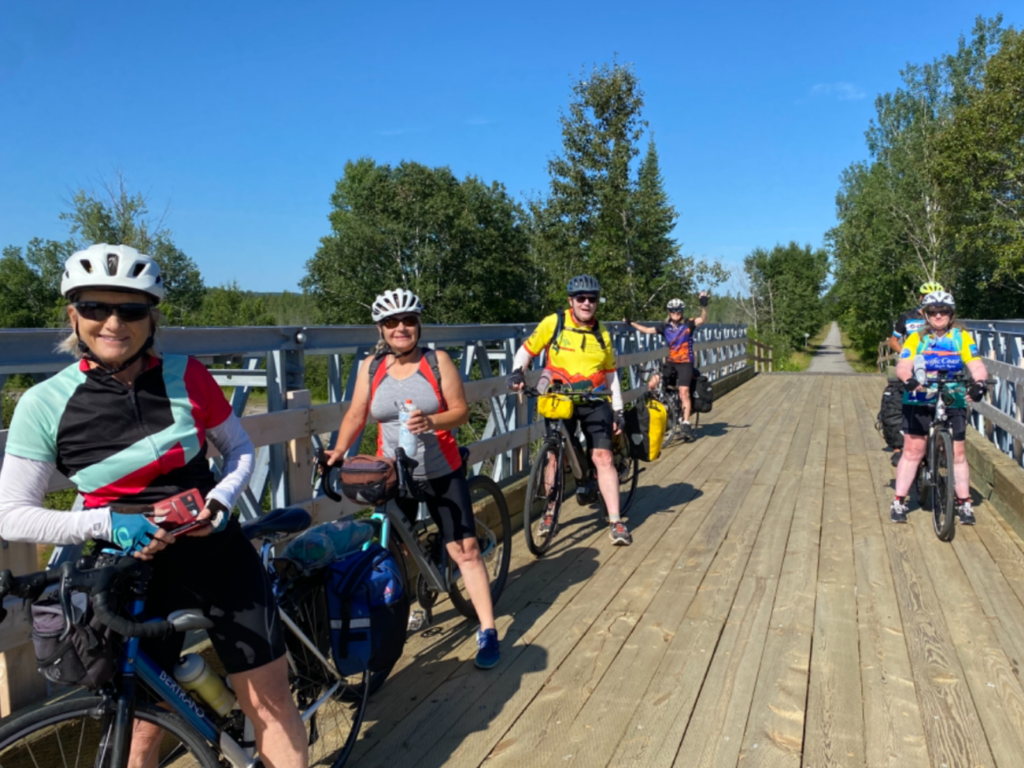 The second day brought us to Nominingue, a small community nestled in the heart of the High Laurentians, and affectionately named “The place where one returns”. Its many lakes and rivers caught the eye at every bend with incredible sights.

Then on day 3, off to the Mont-Tremblant sector, with its bustling little towns where we enjoyed great food and interesting colourful drinks… The lot served on quaint terraces in pretty courtyards. A little note of interest: The Laurentian colonization by Curé Labelle in the late 1800’s prompted dairy farming, making the region “Les pays d’en haut”  (The High Country)  famous for its fine cheese and sinful ice cream.

In the Mont-Tremblant downhill Ski Resort 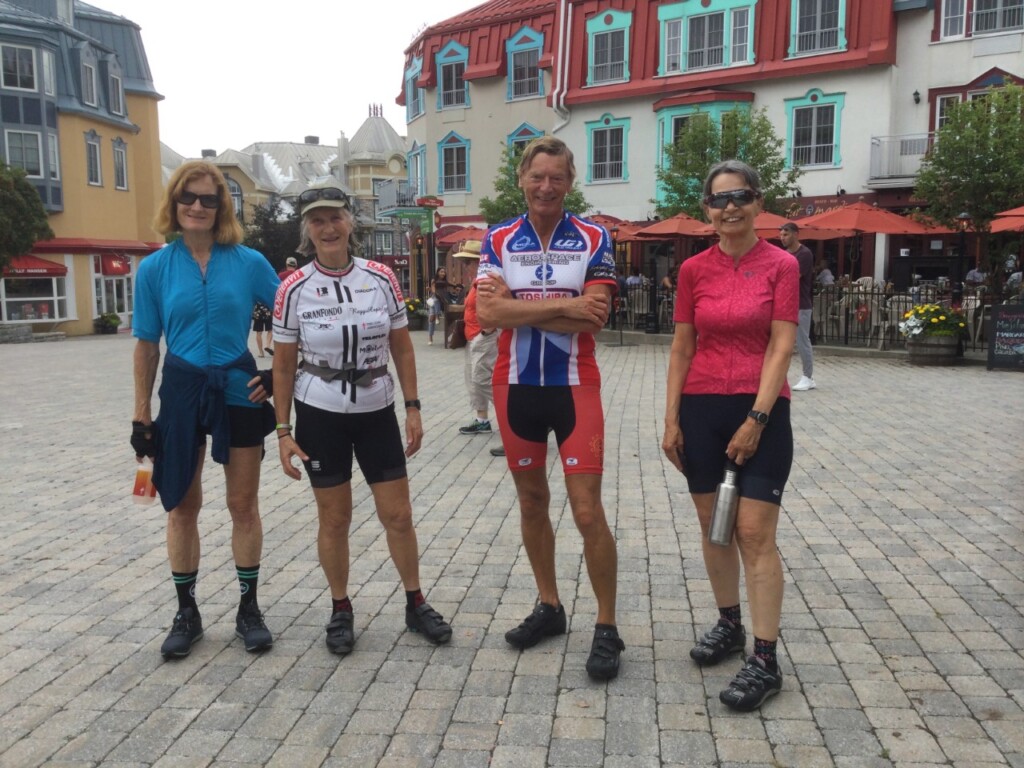 In St-Jovite (one of the four Mont-Tremblant sectors) 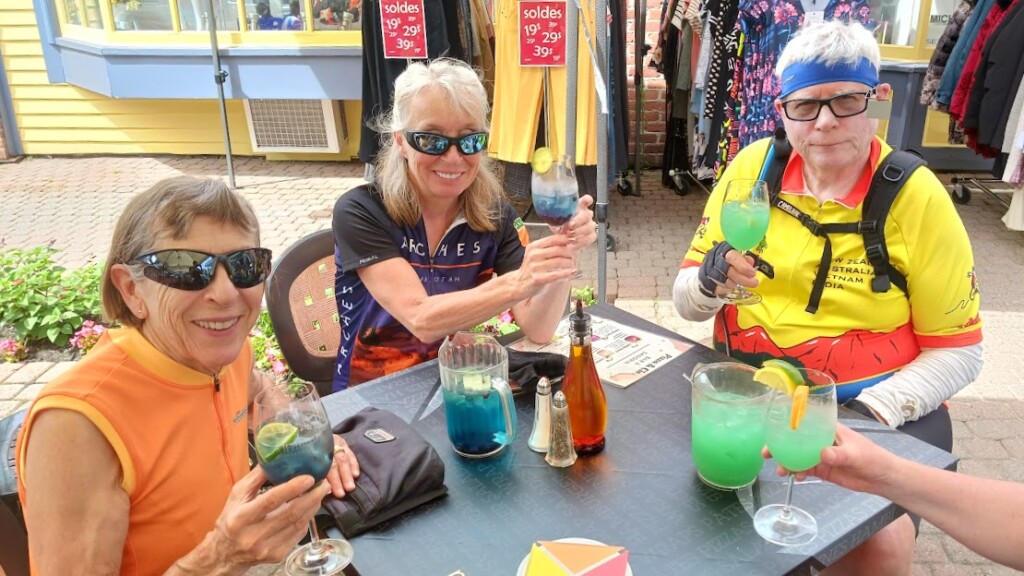 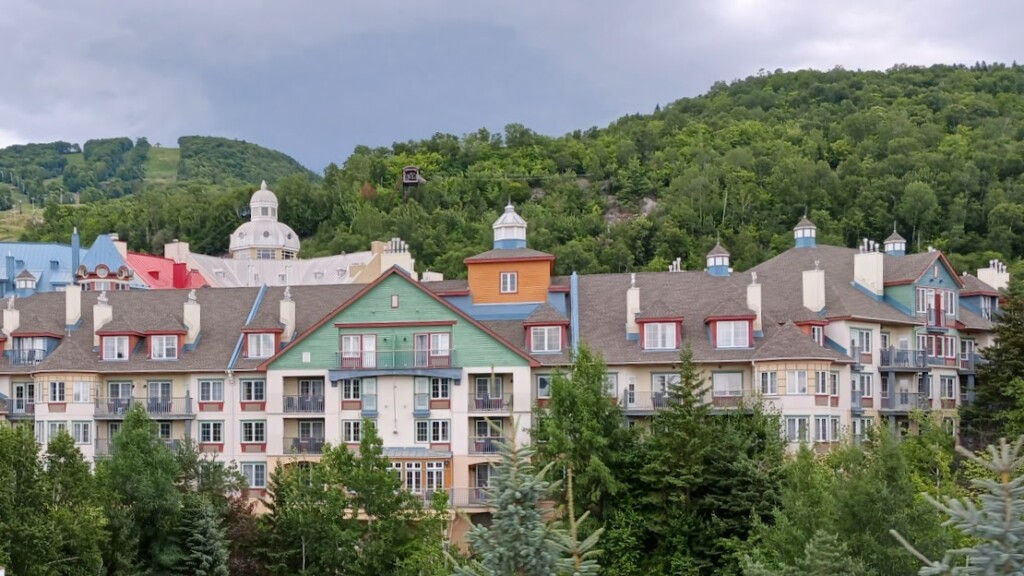 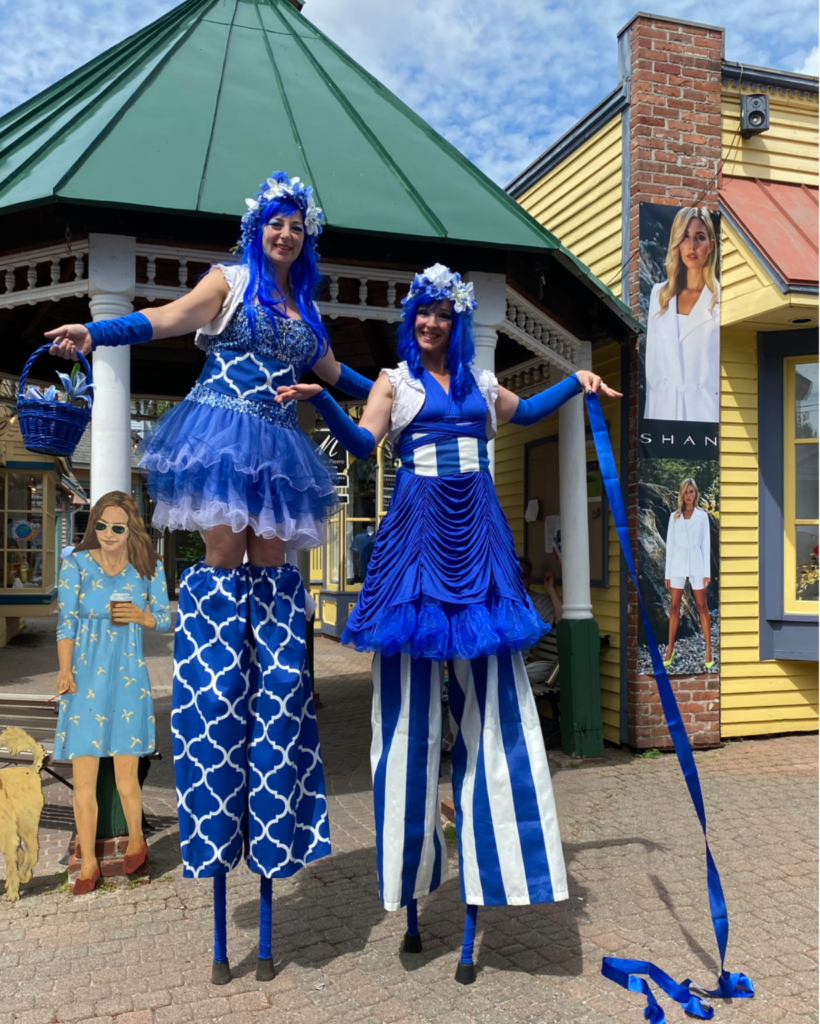 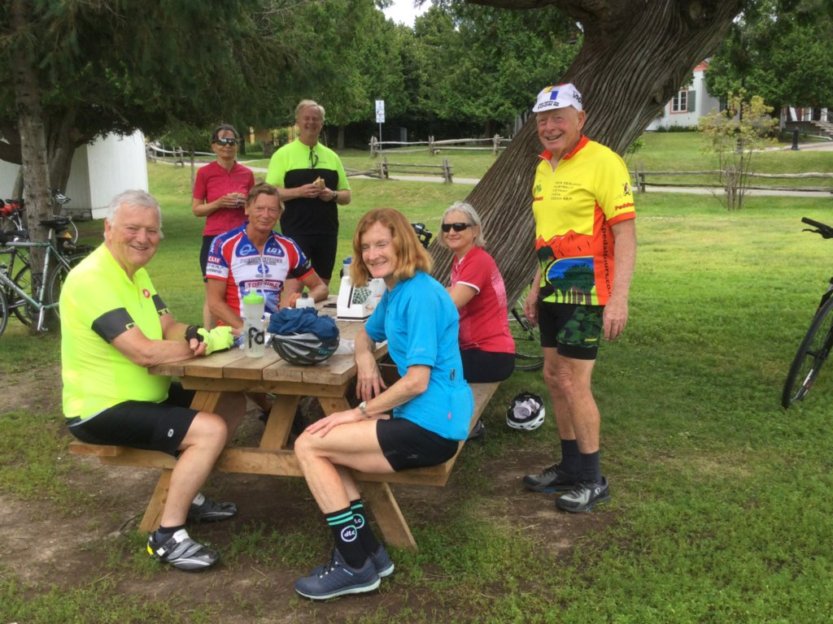 Wildlife on our doorstep 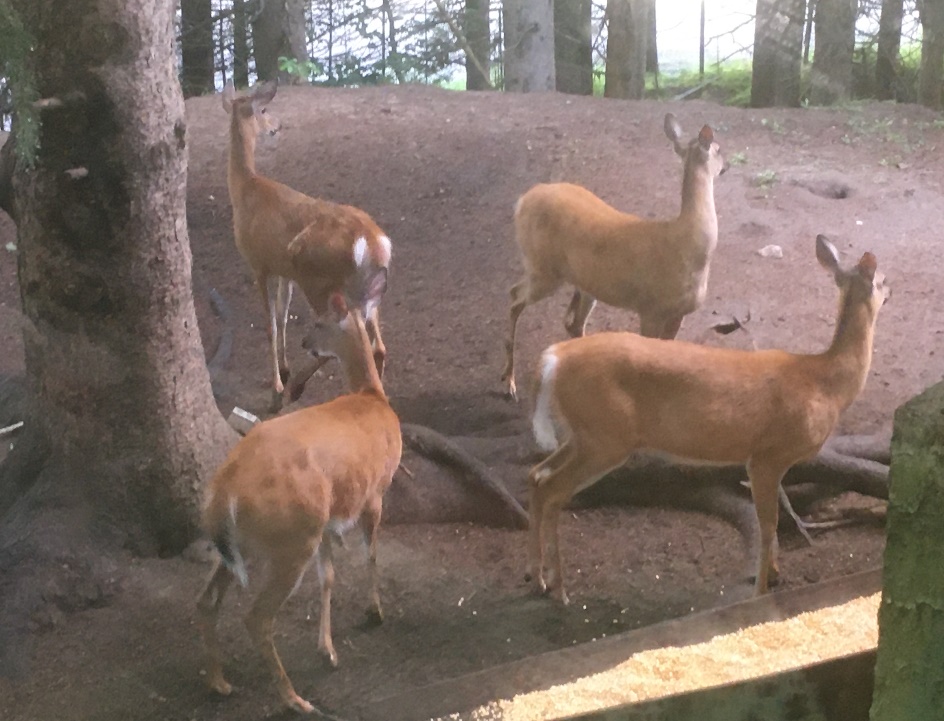 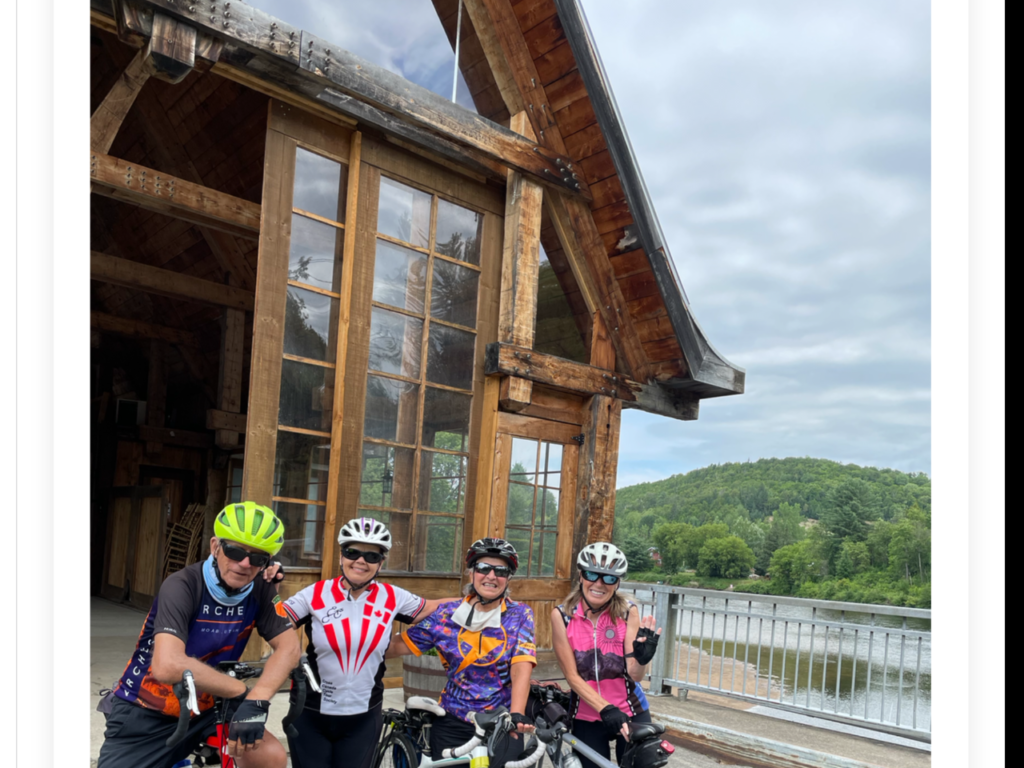 Day 4 was a rest day, but did we rest? No way! Many went on the short ride Geoff had created, but then again… Was it short? No! 55 km of mounts and vales to explore the FOUR villages of Mont-Tremblant. A smaller group of six tackled the very hilly 75 km loop. But what magnificent scenery of mountain tops with too many shades of green to count, bucolic meadows and even a covered bridge with a bar (not open when we passed… Sigh!) and a wooden floor large enough to become a dance hall for various occasions. We did not want to leave!!!

The following day took us to Sainte-Adèle. Not much difference between the short ride (60k via the P’tit Train du Nord) and the long circuit (70k via Morin-Heights). However, an astronomical gap in the elevation gain… the names probably gave you a hint (Ha! Ha!). Only five intrepid (silly!?) cyclists took up Geoff’s challenge. We arrived at Motel Chantolac exhausted but still smiling… with huge bragging rights. Have to be honest and mention that Phil was the only one who got up all the hills without dismounting! 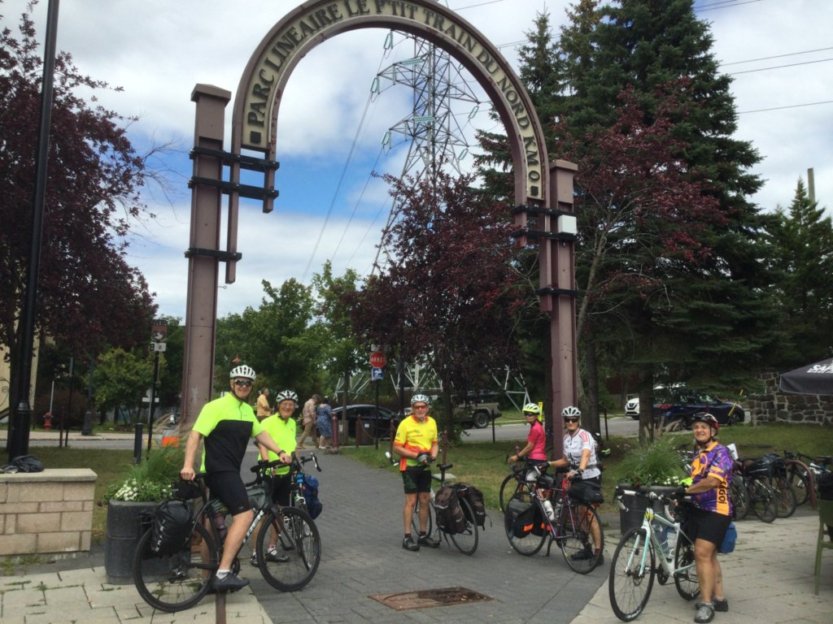 Our last day of cycling on this memorable trip culminated with our arrival in Saint-Jérôme (the gateway to the Laurentian Mountains) with the sun accompanying us yet again!! How fortunate we were with the perfect weather, numerous wildlife sightings (families of deer, hare and a wide variety of birds), Geoff’s and Marg’s impeccable organization, fabulous routes and last but not least, wonderful friendships, old and new. 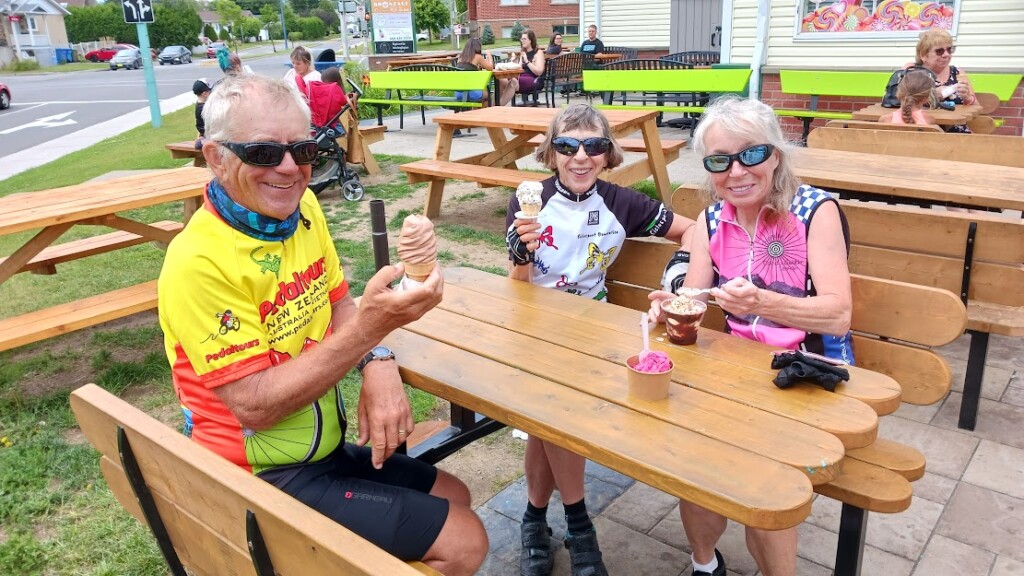 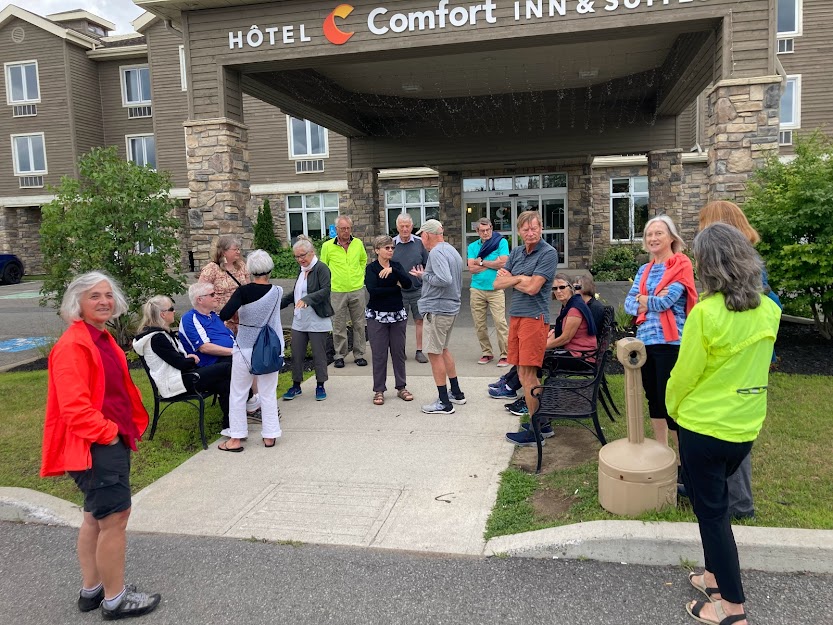 An early Sunday morning short cycle to catch our transport back to Mont Laurier. 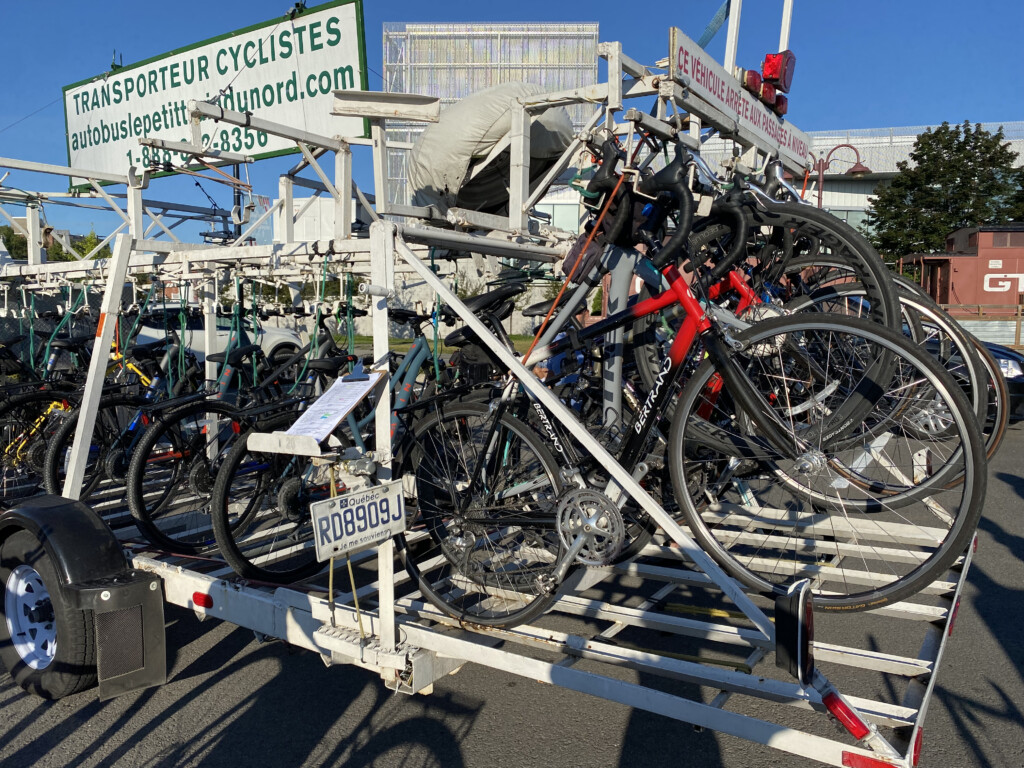 Precious memories to take home… Till next time!