We started our NW Oregon Coast journey at Jim’s house in SW Portland on Saturday afternoon for a nice barbecue.  Dorothy made a couple of delicious apple pies and Jim treated Paul to a Cavatica Stout and Bruce to a Ninkasi Total Domination IPA.  Then the next morning, bright and early at 8:30, we started to ride on a beautiful mostly sunny day.  Our first challenge was a 200-meter climb through some of Portland’s nicest forested neighborhoods including a part of the Fairmont Loop.  After that, it was a quick flight downhill alongside US-26.  If you have to ride along a freeway, this is about as good as it gets.  It’s wide, nicely paved path separated from the six-lane highway on our side.  From there, we worked our way west through Beaverton and Hillsboro to Banks where we had lunch and then on to Vernonia along the most-aptly named Banks-Vernonia Trail.  It’s a 30-km-long rails-to-trails conversion mostly through the forest.  It took us over a trestle almost as impressive (but not as photogenic) as the Kinsol Trestle on Vancouver Island.

Vernonia is a small, one-hotel town and it’s key to the whole trip.  Without it, we would have had a leisurely 50km first day to Banks, and a brutal 120km second day with 1,400m of climbing.  Instead, Vernonia divides it nicely in half.  Our hosts at the hotel were Jerry and Elmer at the Ride-In Motel and they’ve done a nice job making it a viable place.  They also gave us a tour of their wonderfully remodeled home, a converted Masonic Temple, a few blocks from the hotel.

Day two was through the forest on a couple of back roads.  Weather was a bit misty, rainy at times but everyone heeded my email saying to bring rain gear so we did just fine.  Lunch was at the Jewell Wildlife Viewing Station with lunch from Subway that arrived about five minutes before the first rider did.  Afterward, we started the climb and thoroughly enjoyed the downhill to sea level. 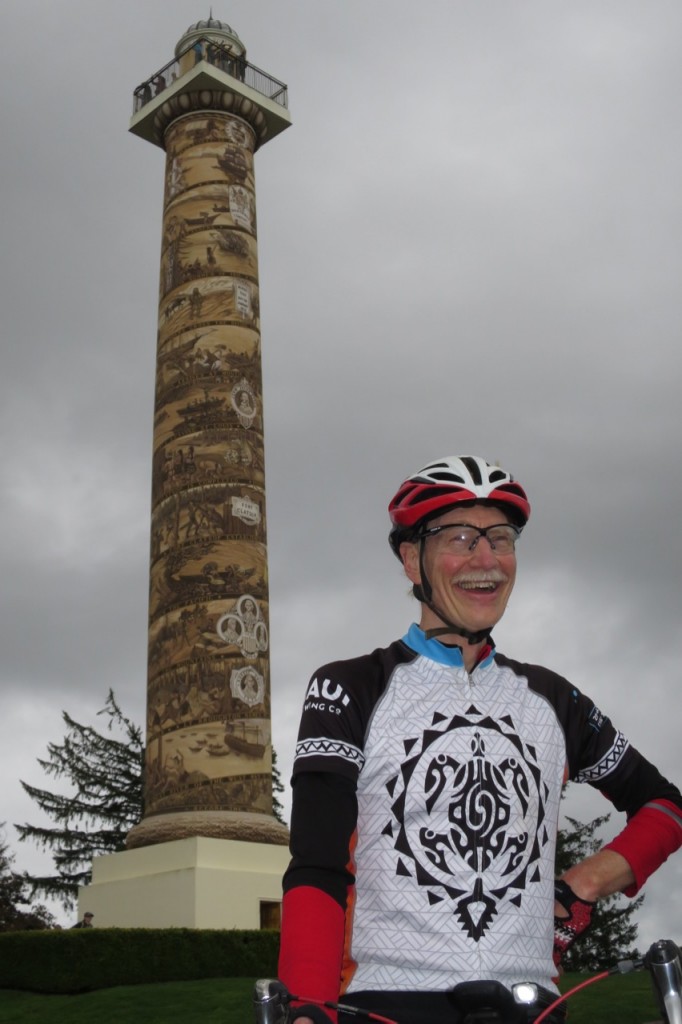 Happy hour on the roof of the hotel

Once in Astoria, most, if not all of us, turned right and headed up Coxcomb Hill to see the Astoria Column.  It was built in the late 20’s celebrating Astoria’s early settlers for their role in expanding the United States to the Pacific Coast.  The view from the top of the hill and from the 164-step circular stairway is amazing, the mouth Columbia River as it empties into the Pacific, the Astoria-Megler Bridge, Youngs Bay, Cape Disappointment on the Washington side of the river and several ships waiting to go upriver. 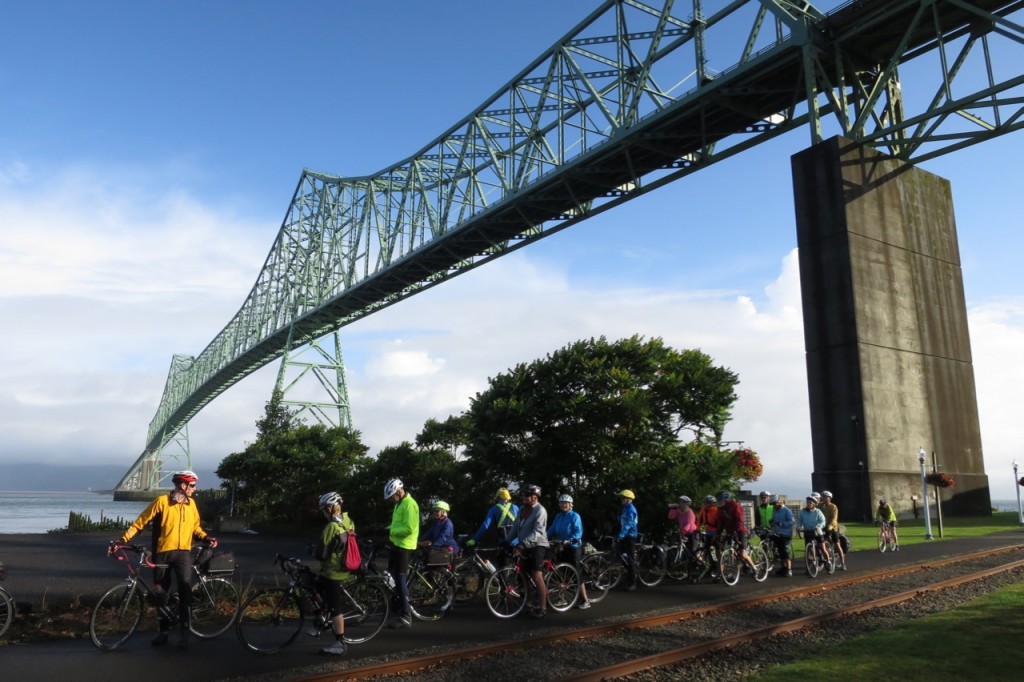 Our group under the Astoria bridge

On day three, we were inland until reaching Seaside on a beautiful back road.  The weather perked up a bit while we were in Seaside and Cannon Beach but turned rather dreary by the time we got to Oswald West State Park.  Some riders got caught in a very intense downpour near Manzanita.

Earlier that morning, we had learned who Oswald West was.  He, as governor in 1913, declared that the entire Oregon coastline was to be a public road, translating into the fact that Oregon’s coastal beaches today are all public.  Another surprising fact we learned is that he wasn’t American but rather Canadian as he was born in Guelph. 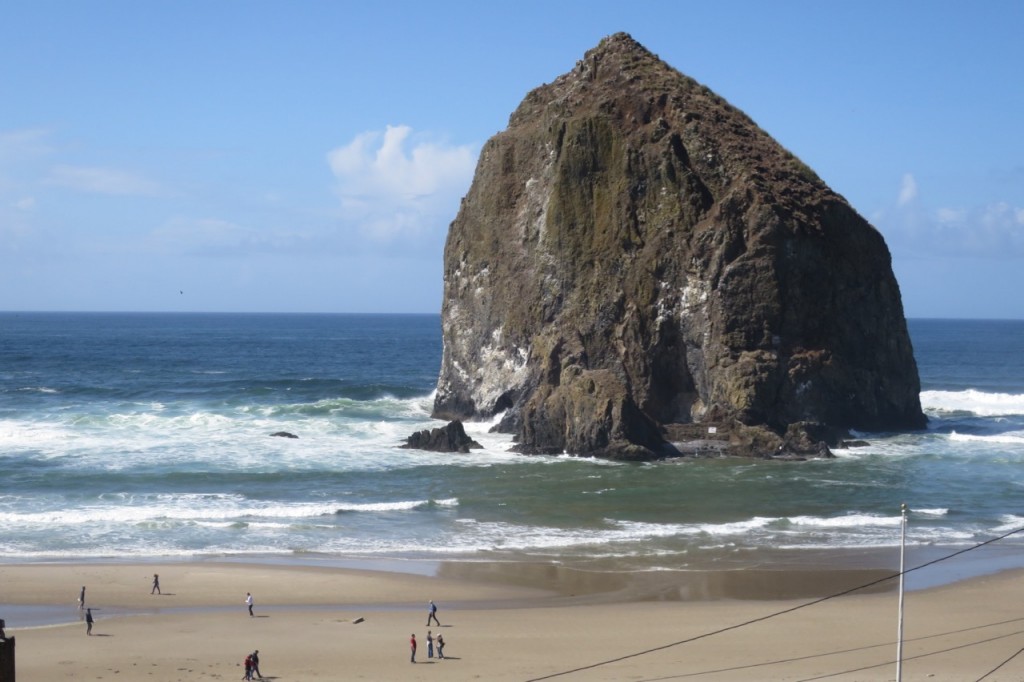 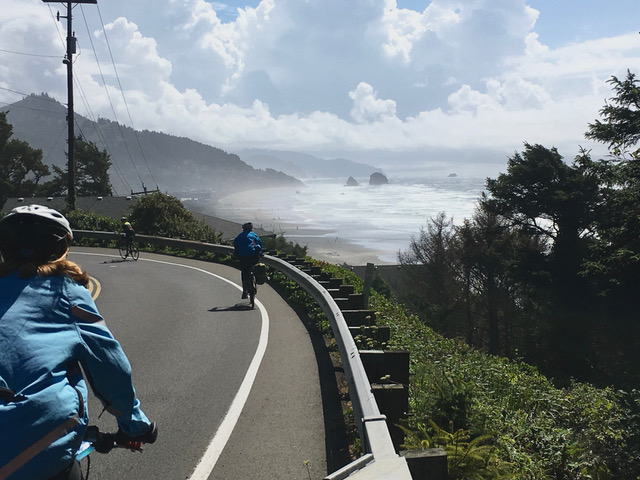 We relaxed in Manzanita on day four.  Our hotel was across the street from the beach and was raved about by everyone.  The pool was nicely warmed while those who had nerve enough went body surfing in the Pacific felt it was downright hot.  Ray and Andrew were gracious enough to let us use their room for happy hour on both Tuesday and Wednesday.  Sharon Lazare led us in yoga Wednesday morning while Bruce played the mandolin in the background.  We had a little music that night with cake for the 3 birthday people. 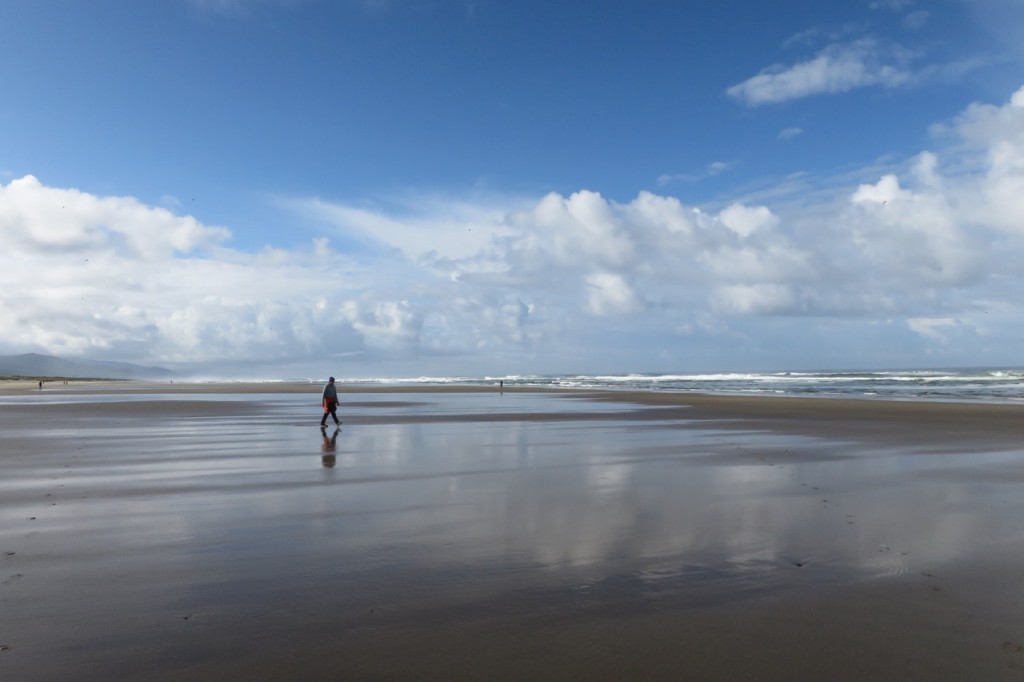 On the beach at Manzanita 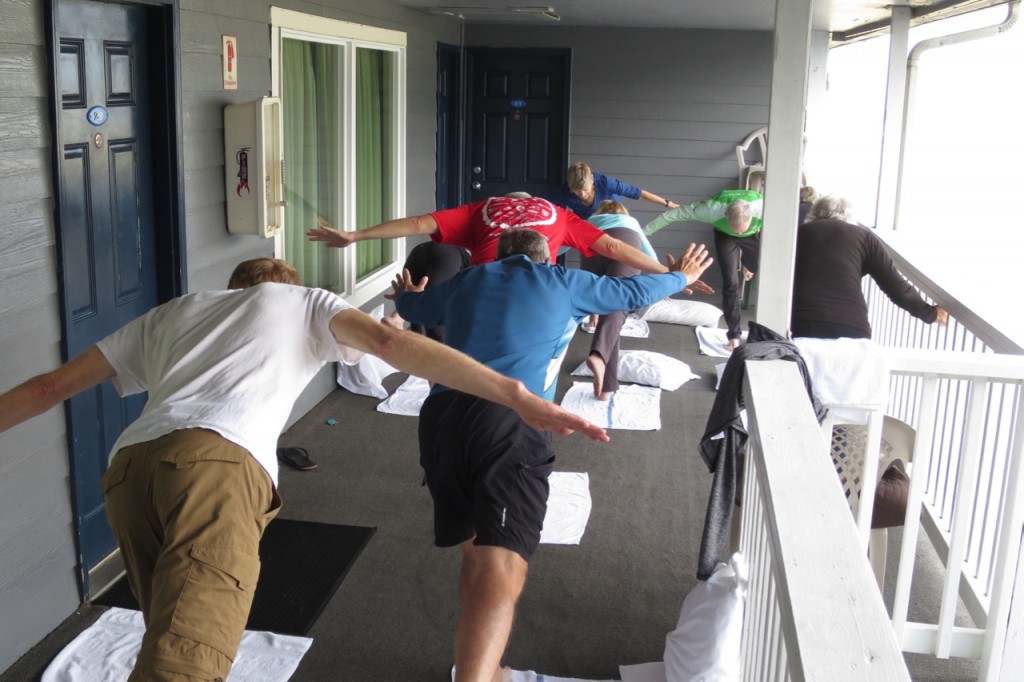 Yoga workshop at Motel on day off 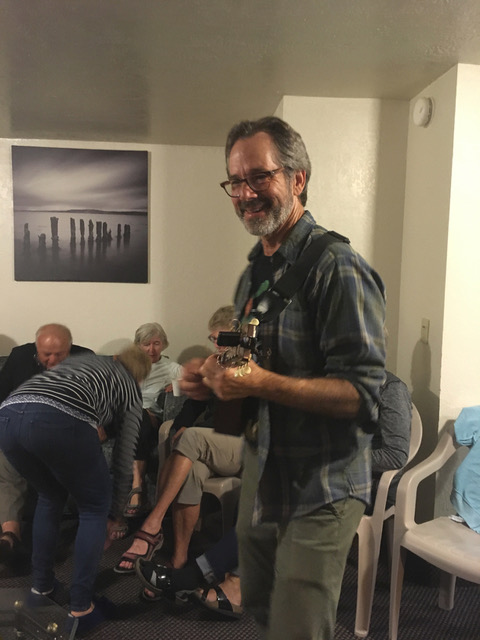 Sing along session with Bruce Daykin on mandolin

Day five took us from Manzanita to Pacific City.  We had coffee in Garibaldi at a wonderful little coffee shop.  We overwhelmed the one gal working there but she was most gracious took in stride and took wonderful care of us.  Afterwards, we tooled along the coast and eventually came to the newly remodeled Tillamook Creamery Visitor’s Center.  We got a chance to see the plant in operation and to sample some of their wonderful cheese which was also on the happy hour menu that evening.

Our route was going to take us on Eckloff Rd. so as to avoid a rather busy and narrow OR-131 but when we got there, we found out that the local public utilities district had it closed as they were doing either logging along the right of way.  Regardless, we headed back toward Tillamook and ended up back on OR-131 anyway. 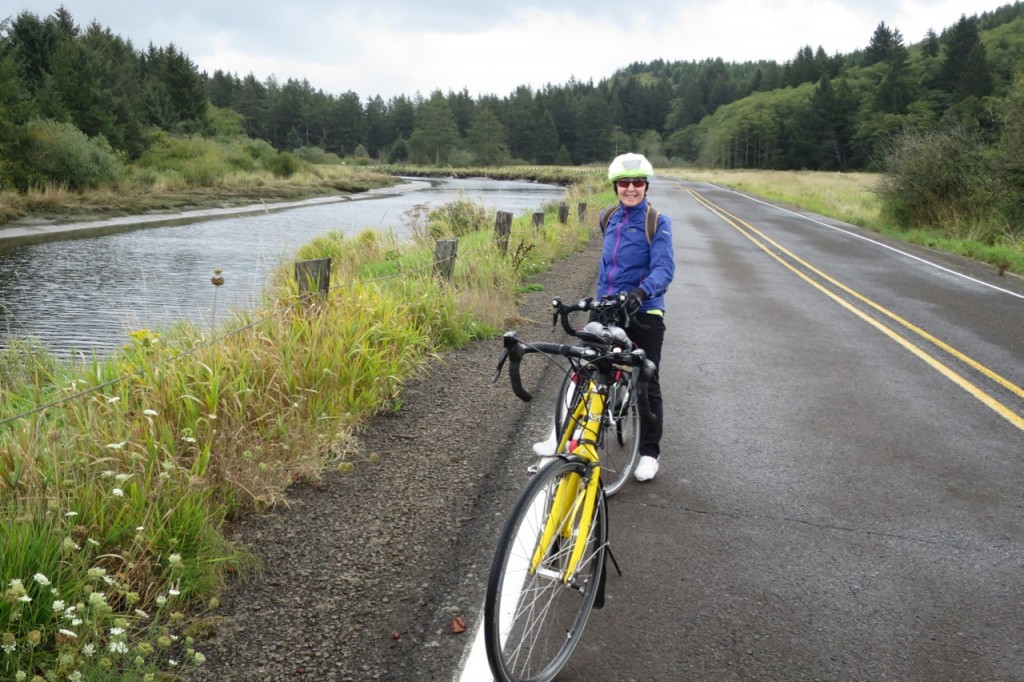 Maureen Weston on the quiet backroads south of Tillamook

As we climbed Cape Lookout, the weather took a turn for the worst.  The more we climbed, the darker and foggier it got.  But on the way down, it got nice again and our downhill cruise into Pacific City was relaxing.

Day six was a ride through the forest on a rather isolated road.  Me, I started out at the hotel with a flat tire that wasn’t flat at the end of the day-before’s ride. Turned out it was either a small piece of metal or an almost–invisible piece of wire that did it in.  I got it fixed and chugged on up the hill thanks to the help of Denise and Jill who hadn’t quite left in the van yet.  Our first bit of civilization and a desire for coffee came in the form of the huge Chinook Winds Casino, a place that left us a bit puzzled.  It was a beautiful day and we were enjoying being outside.  Meanwhile, quite a collection of people were gambling away at the slots and at the blackjack tables, the appeal of which was lost on we cyclists.

After leaving the casino, our route became quite flat and went through Willamina and Sheridan where we grabbed lunch and put it on our bikes.  We all rode out to the Ballston County Park and enjoyed our picnic.  Sharon was thoughtful enough to get a small cake and candles to help us celebrate Bruce’s birthday.  The rest of the ride into McMinnville was on some quite nice, virtually car-free roads.  Once we got settled in, we had a nice walk of about 2 km to get to our tour’s end banquet and craft beer tasting at the Golden Valley Brewpub. 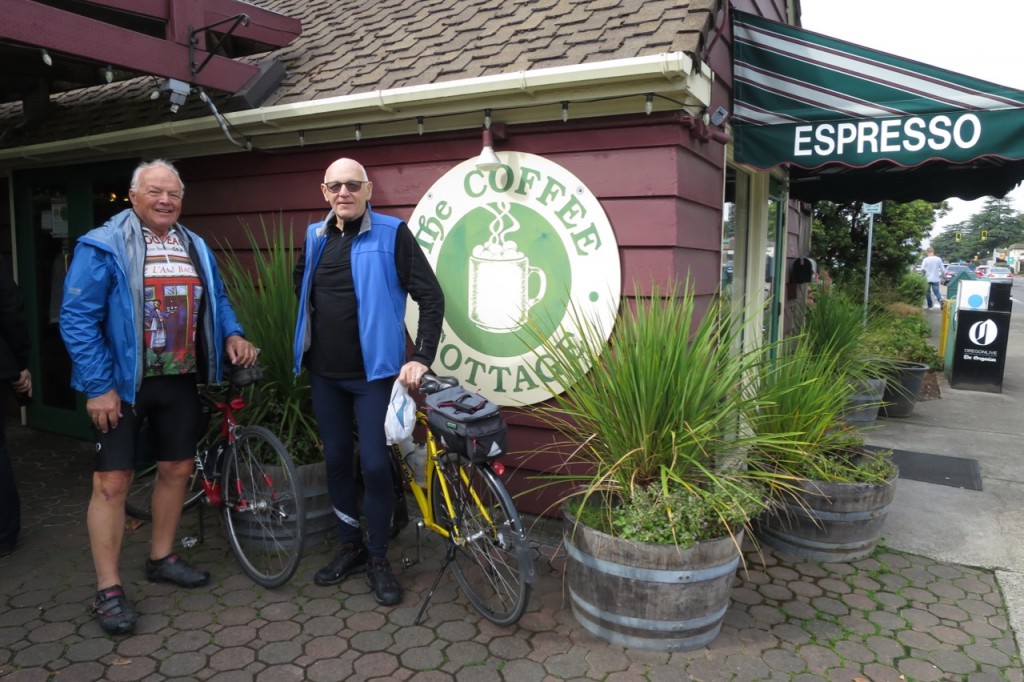 Lots of good espresso to be found in Oregon, Larry and Peter

Day 7 was a ramble from McMinnville to Newberg where we had coffee and then up the very scenic Bell Road to get to Sherwood.  Some of us ended up on Springville Road, a road that was much steeper than what was on the agenda.  But once we got to the top, it was a quick flight downhill to OR99-W.  From there, we caught up with the van in Sherwood where we had lunch.  After lunch, we rode into Tualatin and through Cook Park along the Fanno Creek Parkway.  From there, it was Hall Blvd. and Multnomah Blvd. back to the hotel and to Jim’s house, and farewells.

Jim had to write this report himself because finding a volunteer to do it was overlooked.  Everyone agreed it was a great tour and that Jim had done a brilliant job planning and leading his first tour as a leader.  The route was mostly on scenic back-roads that were well suited to cycling, with modest or minimal traffic.  The accommodations were comfortable, and in some cases like the heritage Elliot Hotel in Astoria, fabulous.  There were lots of good restaurants, pubs and cafes available for meals, and of course Oregon has no shortage of craft beer and wine.  Although many riders rode independently, Jim was always there to lead many riders who appreciated his guidance.  He was always concerned about having a safe ride, and the tour was completed without any casualties.  Jim put in a huge effort to organizer this tour and we are all very thankful for his time and attention to detail, and hope he will do more in the future.