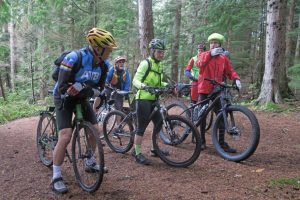 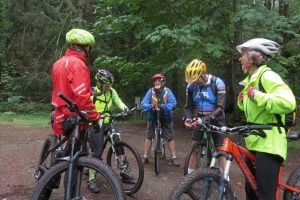 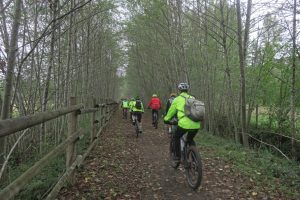 A further report from the Coordinator:

Attached is a start of ride photo. 9 of us started off on a rainless ride with a mix of bikes. A few missed turns resulted in a slightly different route to the dam on Comox Lake. On the way to the fish hatchery several riders took a wrong turn and the rest of the group waited at the hatchery and Marilyn went to look for them. After a half hour wait they all turned up. During the wait we suspected they had entered a space time continuum and visited a parallel universe. The rest of the ride went without incident, while we took some easier trails to accommodate the gravel bikes. A couple of riders turned home early around Burns lake. A good ride in spite of a few miss turns and delays.

Ken is new member who joined the day before was on the ride He chose to return early and Glen thinks he’ll be asking for a refund after the visit to the Nymph Falls Twilight Zone.

Thanks for coordinating, Bob.