The Southern Vancouver Island tour covered a variety of terrains and micro-climates, including very remote areas, urban streets, busy highways and bike paths. Our tour followed on the “wheels” of the Duncan hub-and-spoke. Riders doing both were primed and pumped. Thirteen riders and one van driver made up the group. The rider’s bicycles consisted of road bikes, touring bikes, electric bikes, and a tandem.

On Day one in Duncan, we awoke to steady rain. Delaying our departure by an hour paid off and we left under grey skies and drizzle. By the time we rode into Lake Cowichan,  the roads had dried and the sun began to poke through the clouds. We made our lunch stop in the village, enjoying our soup and sandwiches outside on the local market patio. With lunch over, our route out of the village took us to Mesachie Lake where we began a steady climb to the ridge crest at 382 metres. With the summit reached, we plummeted nearly 300 metres in a thrilling descent, followed by a gentle downward slope all the way into Port Renfrew to complete the ride of 95 kms. Along the route riders reported seeing a pair of fine-looking shoes, each shoe separated from its mate by a kilometre We had been warned about bears and cougars on this section of the route and wondered if their owner had been eaten by wildlife. 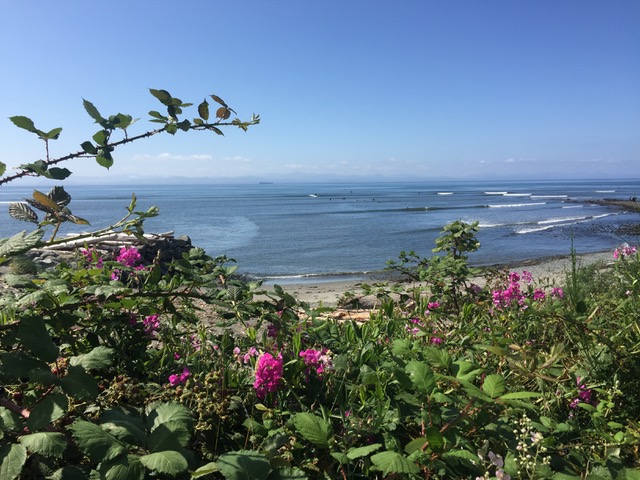 Once in the small village of Port Renfrew,  we gathered at the Big Fish Lodge, our home for the next two days. Since the town is small there were few choices for restaurants, so the plan was to cook our two dinners ourselves. Two of the leaders did a fine job of preparing delicious meals. The first night was chicken breast and Asian vegetable stir-fry and the second evening was chili, salad and garlic bread.

Day two started with a misty fog that encouraged another later-than-planned start for our short ride to Botanical Beach. Most of us rode our bikes the five kilometres there, but two decided to walk and were not all that much behind the rest. Hiking the three kilometre loop trail from the parking lot to and along the beach was a nice change from peddling. The fog coming and going over the headlands and mixing with the spray from waves breaking just offshore made for dramatic vistas. 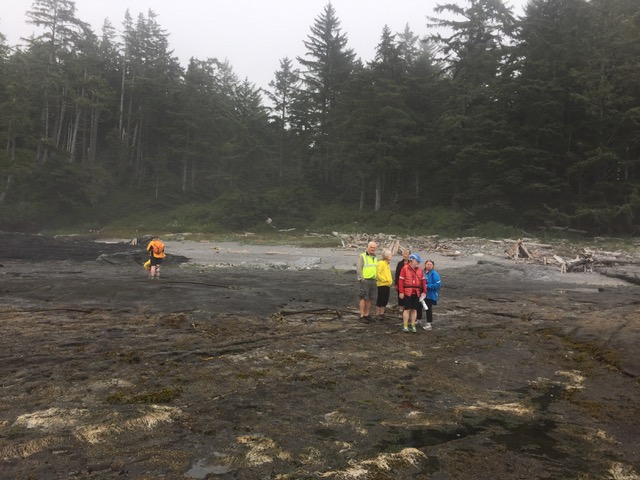 The plan for the afternoon was to ride to Avatar Grove, a protected stand of Western Red Cedar and Douglas Fir about 10 km away. But because of our late morning start and a general feeling of “why bother” only one of us ended up making the effort. The warning that the last couple of kilometres were very bumpy may have discouraged some as well. Indeed, the trip was an adventure. A smooth, flat 8 km along the road to start, followed by a rutted, bumpy, potholed, rocky climb that would allow no more than 4 km/hr going up or down. At the parking area for the grove one tourist got out of his 4×4 truck, looked at the tiny road-bike tires and just shook his head. “Is that a gravel bike?” The only appropriate response was “I sure wish it were.” Back at the Lodge sitting in the late afternoon sun on the deck comparing stories about other trips was an excellent end to this semi-rest day.

Day three was a push down the coast to Sooke. It started with a five km steady climb. We had been warned that it started out gradually and got progressively steeper, over 18% grade towards the summit. While it was a serious climb that spread the group out quite a bit, most riders found it not to be the killer climb that had been advertised. After the hill we faced a long set of rollers gradually descending to the coast at Jordan River where watching the surfers in knee high regular waves warranted a brief stop. The planned lunch stop at the bakery in Shirley was lined up out the door, so most riders settled for a snack and water from the support van, rather than wait to be served. Many found it a great relief to get off the highway when we arrived in Sooke. We stayed in three very nice condos with three bedrooms each. After sitting on various decks in the sun and/or soaking in a hot tub most of us went to the nearby West Coast Grill for a very upscale dinner. 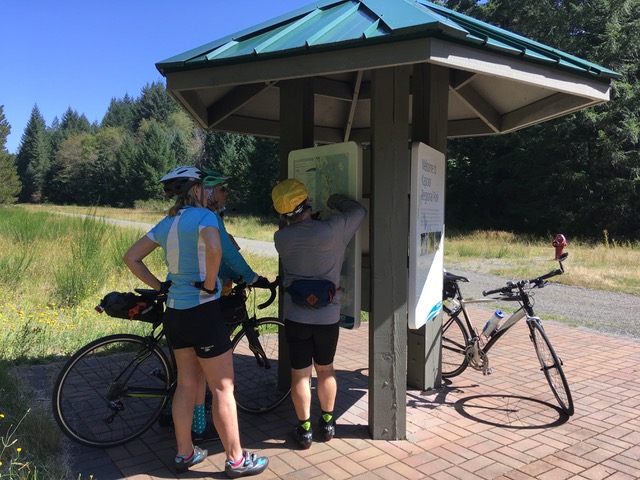 Day four was an out-and-back to Sooke Pot Holes Provincial Park, and for some on to the end of the Galloping Goose Trail at the abandoned Leechtown site. It started in bright sunshine with everyone gathering on the deck of the nearby West Coast Resort Hotel. Of course, today’s ride was very simple; a few kilometres to meet up with the packed gravel trail and then cruising along it in dappled sunlight through the forest canopy. At this point, some of us split off with a few cycling all the way to trail end while others returned to the park to enjoy the river views.  One adventuresome rider even found a secluded spot on the river for a quick skinny dip. Sorry no photos. The afternoon was taken up with various leisurely short rides or lazing around the condos, maybe with a hot tub soak thrown in. We split up for dinner in various local restaurants.

Day five was a long one, going from Sooke all the way around through Victoria to Saanichton. It started in bright sunshine with a short ride to The Little Vienna Bakery that turned out to have a good variety of breakfast options. Once fed we continued highway 14 out of Sooke to connect with the Galloping Goose Trail. The first part of the trail ride was quiet with pleasant views of the Sooke inlet through the trees. The trail became increasingly busy the closer we got to Victoria with many cyclists, runners, dog walkers and hikers. We met the van for a morning break near the Royal Roads University.

Rather than following the scheduled route connecting to the Lochside Trail, our leader took us on mini tour of downtown Victoria via the E & N Rail Trail through Esquimalt and past the Canadian Forces Base Dockyards. Winding through downtown Victoria on newly installed separate bike lanes with all the flower baskets (and tourists) was entertaining. Negotiating the bike lanes required frequent stops and remounts which was especially challenging for the tandem team. We took a meandering route through the Oak Bay community to lunch at the upscale Oak Bay Beach Hotel. At the hotel some of us ate on the deck of the Snug where blankets were provided for those chilled by the breeze in the shade. After lunch we followed a circuitous route, up the Peninsula to our motel in Saanichton. 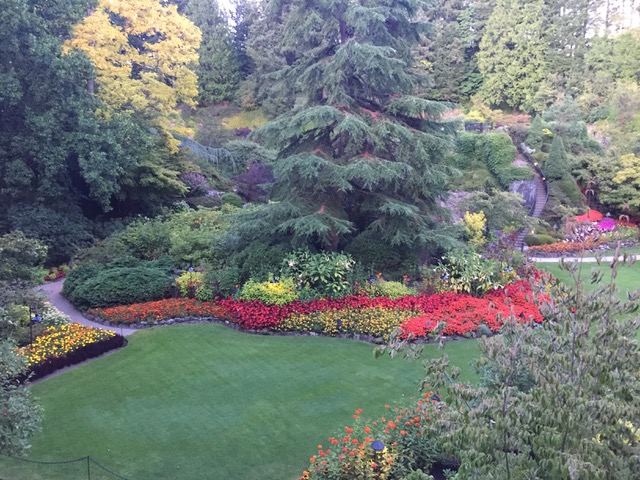 After a quick cleanup at the motel a friend of one of the leaders kindly shuttled most of us over to Butchart Gardens for a flower visit, dinner and an evening concert.  The gardens were of course spectacular with flowers everywhere on steroids. The cafeteria dinner was adequate, and the dance band concert made some of us sorry we were too tired to get up and boogie.

There were two route options for our return to Duncan on day six.  One via Salt Spring Island and the other a shorter, flatter and more direct route from Brentwood via the ferry to Mill Bay and then through Cowichan Bay to Duncan. Some riders faced long drives home, so the group chose the direct route to allow them more time to return in daylight. A coffee stop in Mill Bay was the only rest on this shortened route with everyone getting back to Duncan before 1 pm. It was nice to finish early since the temperature under the clear skies was rapidly approaching 30 degrees Celsius. 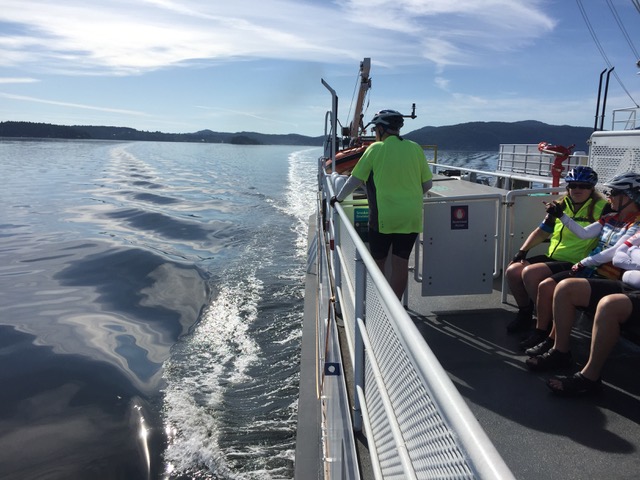 Summing up: The “Pacific Marine Circle Route” is certainly one of the beautiful parts of “Beautiful BC”. From deep rain forests and seascapes to flower-filled Victoria and the quiet trails and back roads of southern Vancouver Island.  This tour touched on a fine variety of scenery…. with fantastic weather the whole time. The accommodations were quite nice and varied, from motels to condos to a group lodge. The riding conditions were generally fine. However unexpected heavy Sunday traffic on the narrow sections of Route 14 south of Jordan River on Sunday made that ride less than pleasant for some.

With the good weather, interesting people and wonderful scenery this tour was quite enjoyable.