As many of you already know, on the fifth morning of our tour we were awoken to the news that one of our fellow cyclists, Max McClanahan, had passed away in his tent in the early hours of the morning. We were all shaken and stunned by this devastating news. Our tour leader, Bruce Daykin, showed outstanding leadership and strength during those incomprehensible early hours. It was through his example we were all able to deal with the reality of Max’s death and all chose to carry on with the tour. It was a surreal scene as we gathered around Max’s tent to say our goodbyes and then headed off, his bike continuing the journey with us We were very fortunate that his partner, Valerie and her friend, Lucy, were able to catch up with us a few days later and spend a few hours with us. Valerie brought along a case of beer and we all toasted Max and shared some memories. My last memory of Max is the evening before he passed away. He was sitting at the table writing his blog and few of us were unsuccessfully trying to log onto the blog on our various devices. He told me that I  probably wasn’t having any luck because of the expression on my face. I was just beginning to discover that there was a funny, gentler side to this man that I had always thought was 100 per cent curmudgeon! I am writing this report in memory of Max. I sure wish I had listened to him more carefully when he was trying to explain to us how to download our photos, etc. onto the website!

Life is a Highway

During the 1st week of August we all arrived at various times to our motel in Levis (across the St. Lawrence from Quebec City). During this time the bikes were all reassembled and the rental truck was loaded with the camping equipment which Bruce had purchased prior to our arrival. By the time our departure day arrived, the truck was fully supplied with stove, coolers, canopies, pots and pans, etc. etc. We also all had an opportunity to do a bit of sight seeing and many chose to take the ferry over to Old Quebec and do some exploring (and shopping!) there. The ambience in Old Quebec City is reminiscent of cities in Europe…. cobblestone streets…. musicians on every corner… vendors selling their wares…. charmIng!

Over the next 21 days we would travel from Levis to Moncton, New Brunswick, primarily traveling along the coastline of the Gaspé Peninsula. We would travel 1400 kilometres, with an average daily distance of 73.5 kilometres. Most of the time our riding was very pleasant — gorgeous scenery.. little traffic… good road conditions… In Quebec most of our riding was along “la Route Verte’ which meant the roads met standards deeming them safe and comfortable for cyclists. This proved to be true — the shoulders for the most part were wide enough and clear with only a few hair raising situations where the shoulders were non existent or crumbling. We also found that the motorists were generally courteous to cyclists and kept a respectable distance from us — just like the road signs told them to! The roads in New Brunswick were generally good as well although we did travel about 10 kilometres of highway where there were 2 lanes of traffic, including a lot of trucks, zooming by as we had no choice but to ride the white line since there was no shoulder!

On the morning of our departure it was pouring. We hung around the motel cafe past our set off time but eventually, after it had lightened up somewhat, all donned our rain gear and set off. Over the next few days we did spend some time riding in the rain and listening to the rain from inside our tents. Thankfully this pattern didn’t last and we enjoyed many days of blue skies and sunshine. 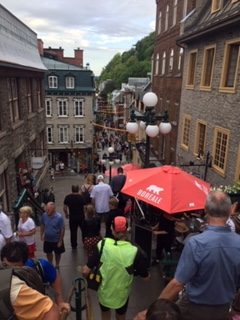 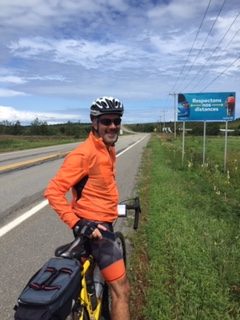 And the drivers DID respect us. 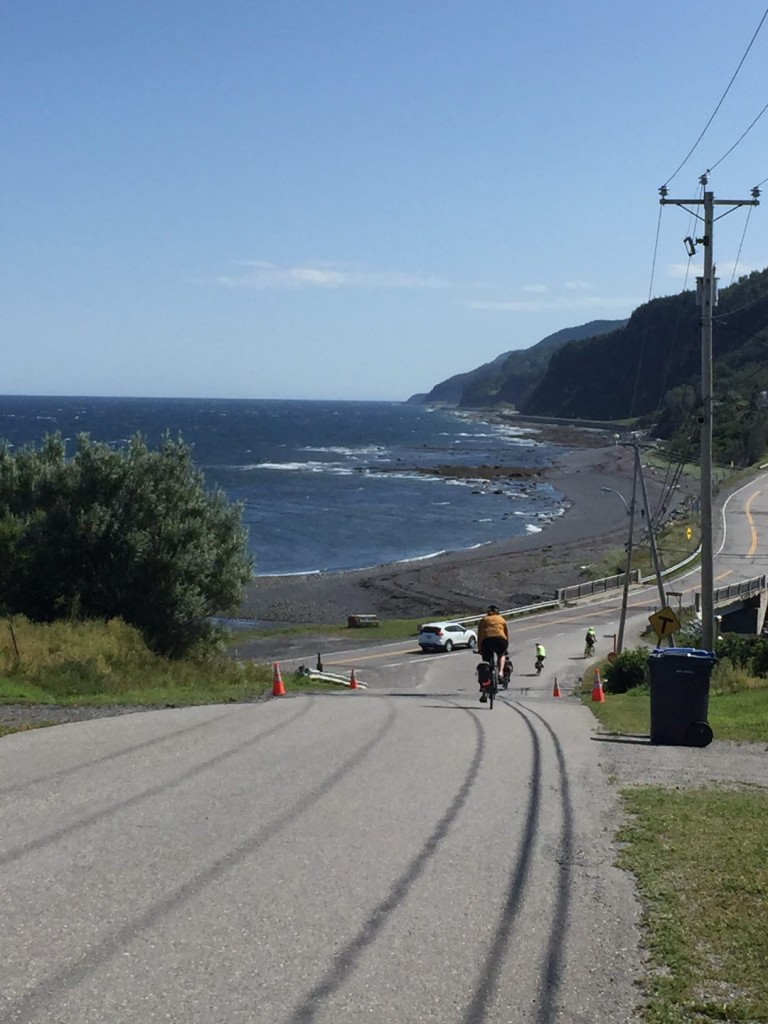 The St. Lawrence River was always on our left.

HaHa… until you get to Quebec! The facts, according to the cue sheets — over the 21 days we CLIMBED a total distance of 11,211 meters, with an average daily climb of 590 meters. Our biggest climbing day was 1,243 meters. Words that come to mind when I recall those hills are – daunting… never-ending… intimidating… As I began an ascent I remember thinking it was just like going up the roller coaster at the PNE — but this is coming from the perspective of a ‘back of the pack rider’…. Max would have loved those hills. 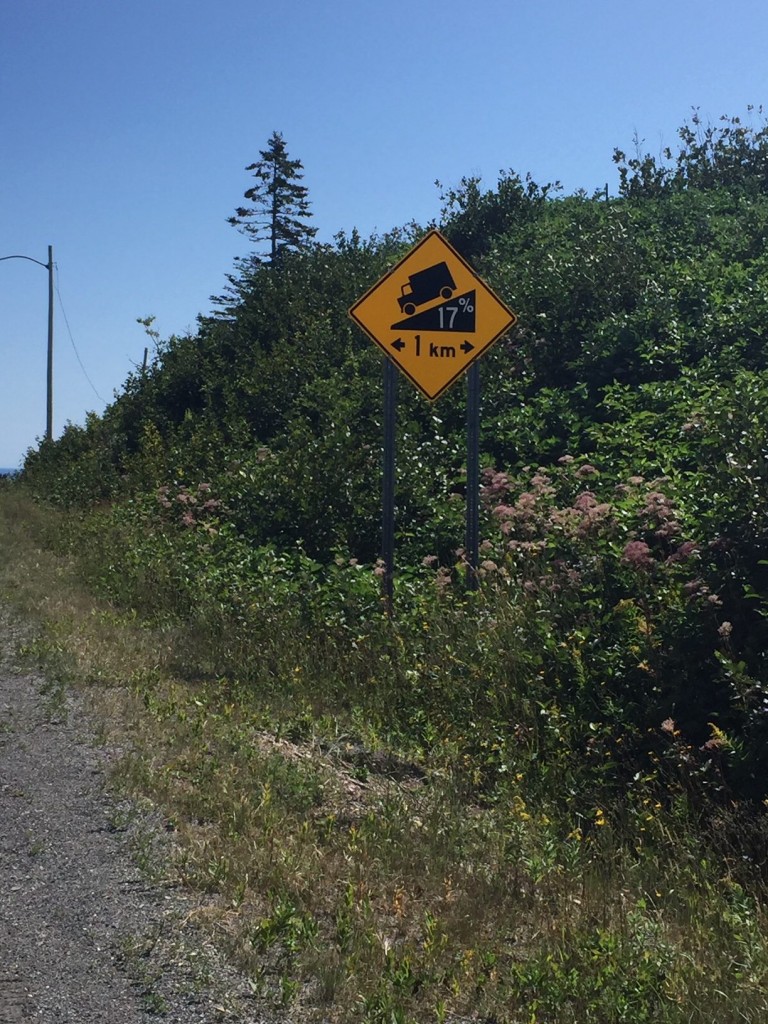 Fortunately we were going downhill!

THEY CALL THE WIND….

…AMAZING!… As long as you were heading in the right direction…. which we were most of the time… During the first days of our trip, especially, the TAIL WINDS were wonderful. I would glance down at my odometer and see that I was going about 35k without any effort! Cyclists going the other way didn’t seem to be enjoying themselves as much as we were! 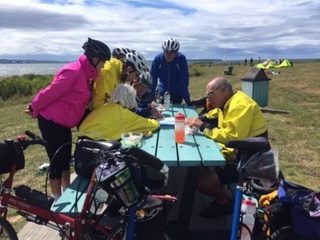 Of course the trip is not just about the cycling. Not to be forgotten is the fact that we were camping for 18 days out of the 21 day trip. The majority of the campgrounds we stayed in were wonderful. There were usually hot showers nearby and some provided laundry facilities. In Quebec many of the campgrounds had ‘recreation rooms’ where campers were invited to ‘hang out’ . Many of the campgrounds were along the shoreline and the scenery was nothing short of spectacular. A few brave souls even went swimming. At the beginning of the trip we were all divided into cooking teams and everyone rose to the occasion — all the meals were tasty and creative and there was always plenty of food…. we even started having pre-appies…never a dinner without dessert…breakfasts always included beautiful fruit salad, as well as an egg dish and porridge (a la Bruce). We even had a feast of lobster when we were in Percé, complete with instructions on how to dissect our very own lobster! Hanging around chatting during happy hour…. washing dishes together (our biggest argument was WHICH basin the bleach was supposed to go in!) …. if you tried to reject a washed plate you were told to DRY HARDER.. no argument…cooking meals together…. sitting around a campfire, singing along with Bruce….. all these lead to a lovely sense of camaraderie among the group. 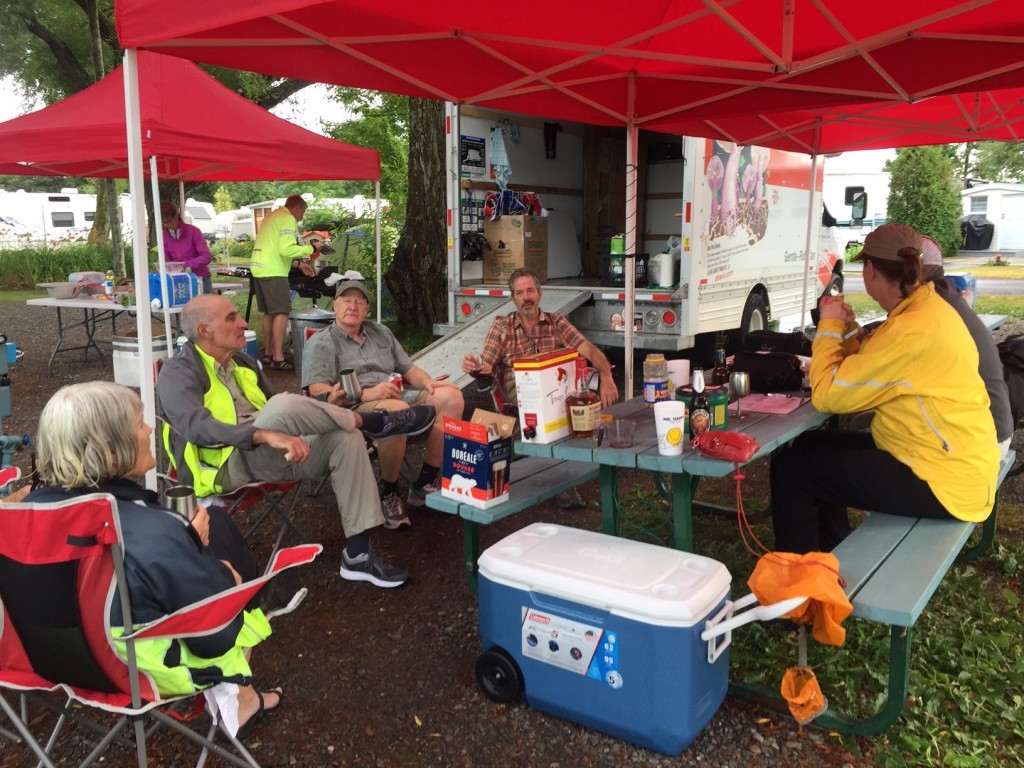 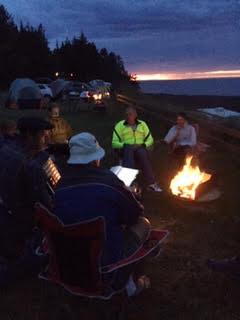 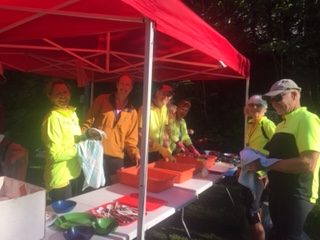 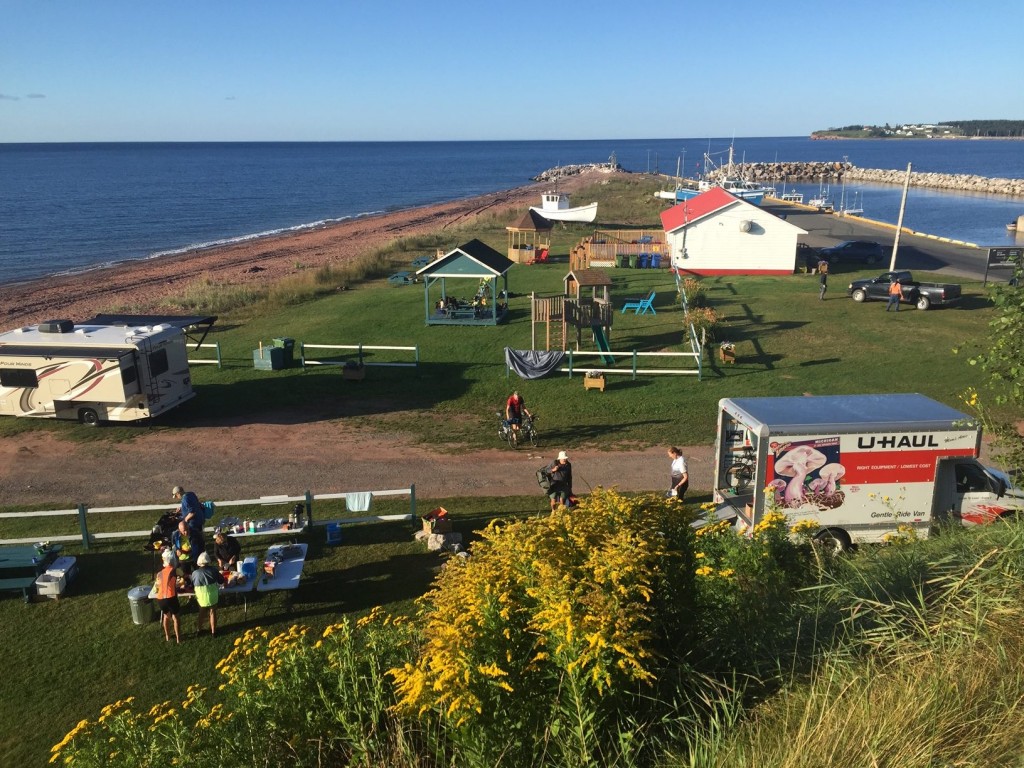 Overlooking our home for the night.

Our bike tour included some short biking days and rest days, giving us an opportunity to see some of the sights beyond the view from a bicycle seat. Our first rest day was in Matane, a pleasant small town with several attractions, including a garden tour and weaving exhibits. We were able to spend most of a day in Forillon National Park where some of the people did a three hour hike to a look- out on top of a high ridge. The views along the bluffs were spectacular. We were also able to spend some time in the small city of Percé. Many of us took a boat trip out to Roche Percé and visited Bonaventure Island, a National Park with remnants of an old fishing village. The trails will take visitors entirely around the island and to North America’s second largest breeding colony of gannets – over 50,000 breeding pairs! Thanks to Bruce’s sleuthing, most of our mornings during the trip were highlighted by visits to great little coffee shops and patisseries. 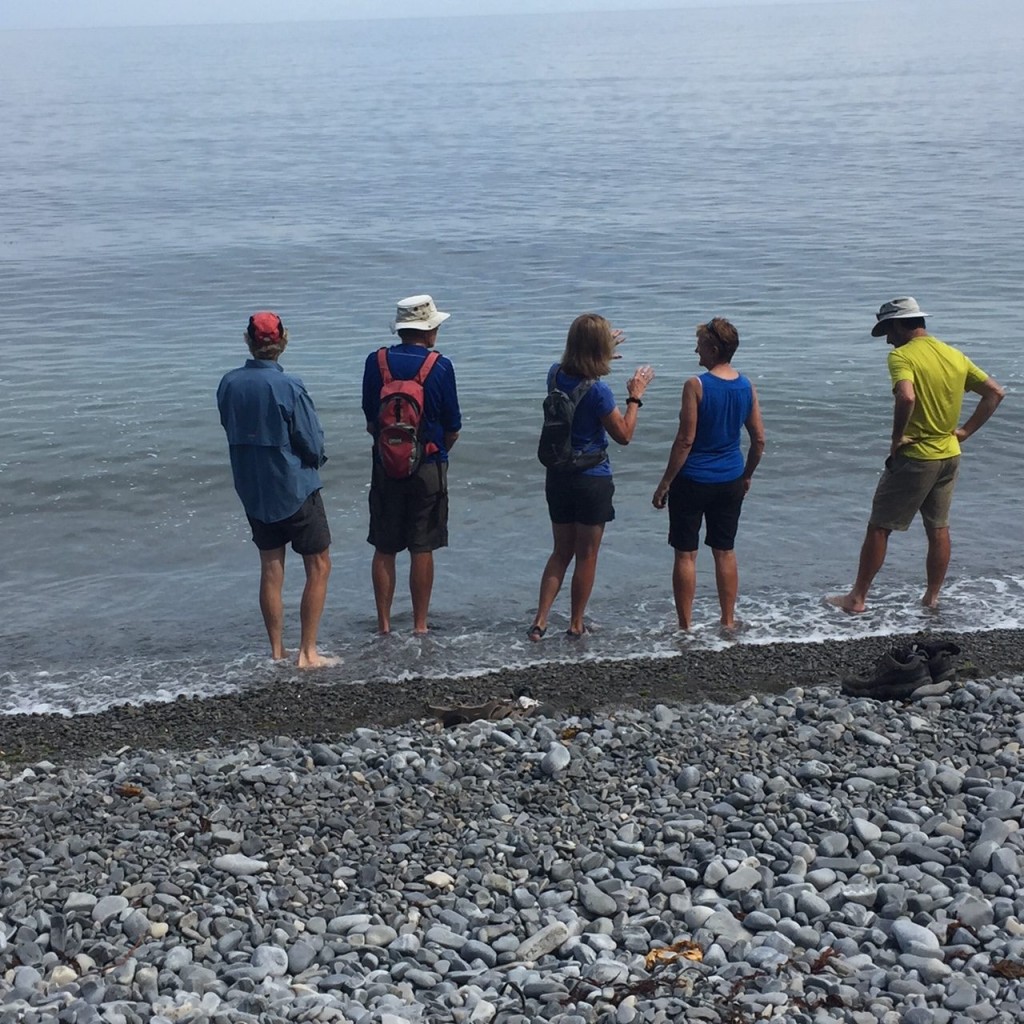 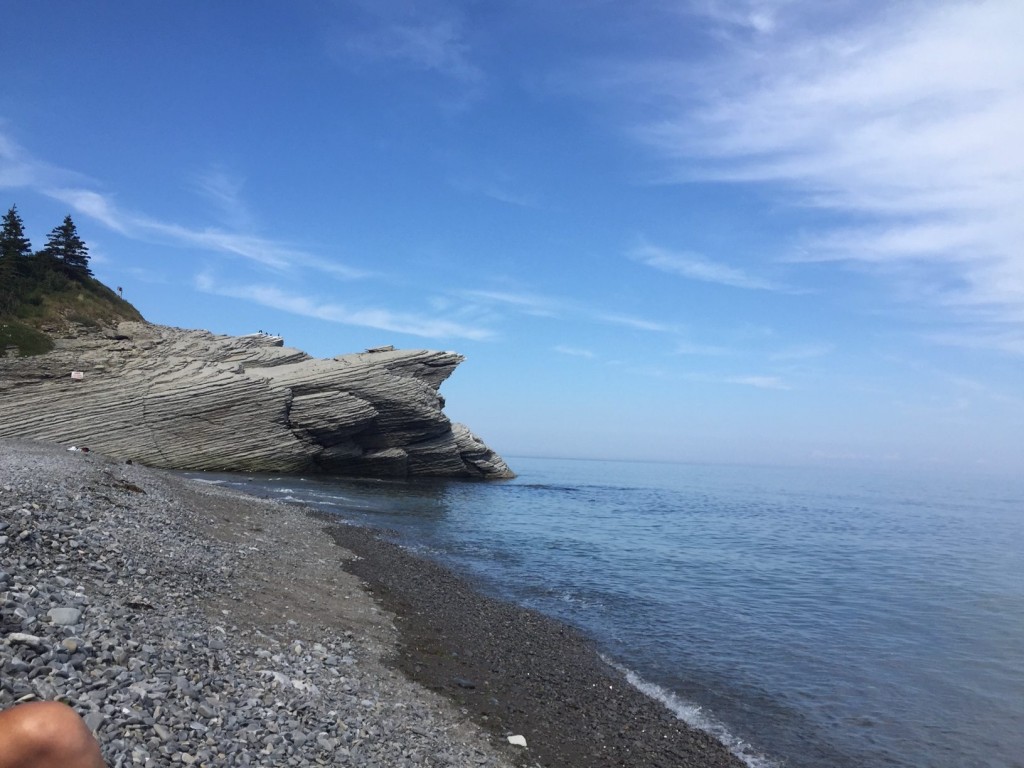 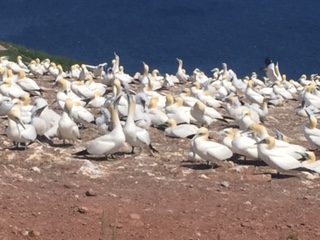 Having a gander at the gannets.

Thanks to all my fellow travelers for your friendship and good spirits.
Thank you, Bruce, for arranging this amazing tour. You had every detail covered, from fully stocking the truck to meticulously preparing our cue sheets, to entertaining us around the campfire…. Can’t wait to see what trip you will be offering next!