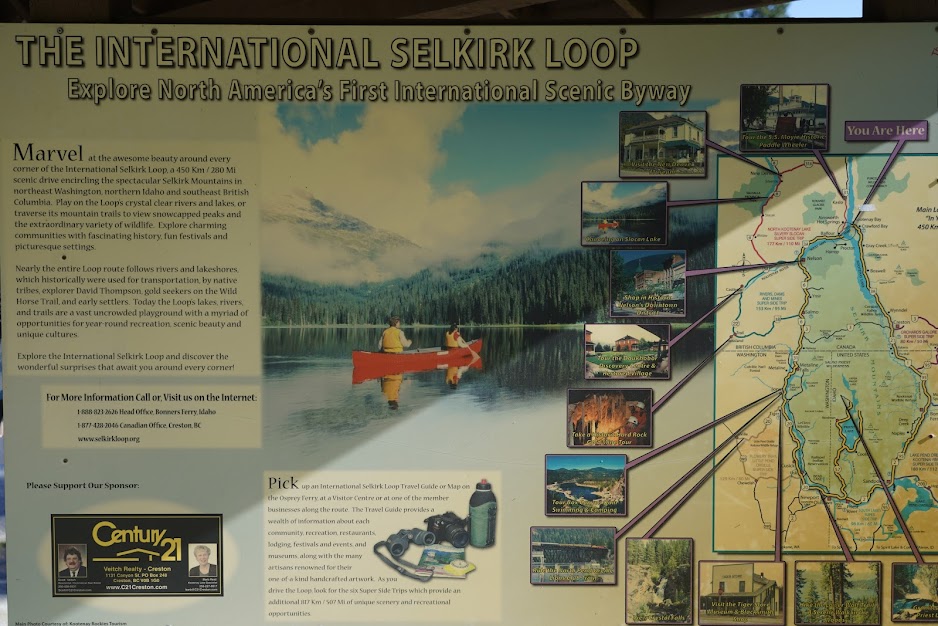 On June 15, 2019, twenty-two cyclists gathered at the Whistle Stop Campground in Nelson. Bikes, tents and camping gear quickly filled the small area allotted to the group. Seventeen tents were squeezed into a space better suited to half that number of tents. RVs, 5th wheels and big trucks hemmed the campers in on all sides. All the cyclists quickly got to know each other.

Cooperation, compromise and mutual respect was evident from the first night together. Everyone willingly helped with the various chores – loading/ unloading the truck, setting up rain shelters, arranging tarps as wind barriers, participating in the dish detail antics, coffee preparation. A strong sense of teamwork coupled with fun and laughter was ever present with the campers.

“dish detail antics” – Yes, the guys did the dishes too!

For those unfamiliar with a cycle/camp CCCTS tour; teams are assigned by the group leader to work together to shop for the groceries needed for their Happy Hour, a dinner and a breakfast, then preparing those meals and driving the rented truck which transports everyone’s gear plus the cooking equipment for meal prep. Everyone takes a turn and sometimes, due to the number of campers and number of days, some groups shop, do meal prep and drive twice. Some secrecy surrounds the upcoming meals- each meal is greeted with interest and expectation-all the meals were delicious, nutritious and amazingly different from all the others. Dietary considerations were taken into account for vegetarians, GF and reduced sugar requirements.

Every morning prior to departure, Doris Maron, leader extraordinaire, went over the day’s route. The group headed out with their cue sheets; several cyclists also had GPS. The truck drove ahead and parked about 30 km down the road, got food/ drinks/snacks out for the cyclists ; everyone prepares a bag lunch in am before leaving the campground but truck does a lunch stop so everyone can fill up on water, etc.; once everyone has come through, the truck drives on to that day’s campsite.

Some days were leisurely riding but mostly we rode quickly with our eyes to the rain clouds ahead, behind and above us. We would try to out ride the storm in order to arrive at the campground so we could dry out our tents then set them up for that night before the rains started. We were lucky every night to accomplish this between rainstorms.

Happy Hour gave us all a chance to reconnect with the other cyclists and relax.

Several evenings we were treated to live music by Bruce Daykin of Victoria. Sitting by the fire and listening to and singing along with Bruce as he played his accordion gave us all a very special memory of the Tour.

Our route was approximately 800 km starting and ending in Nelson. We travelled through Idaho- mostly southerly town was Sandpoint; east to Montana with Troy the furthest East, northward through Montana and Idaho then back to BC traveling through Creston, Kaslo, New Denver, Slocan and finishing in Nelson. ]

Ride distances varied with 75 km the average. The route took us mostly on rural backroads with occasional highway stretches with wide shoulders. Traffic was relatively light most of the time. Roadwork between Ainsworth Hot Springs and Kaslo – grooved pre-pavement surface – shook every part of our bodies for 22 grueling kilometers!

We were challenged by rain, hills, and a few gravel roads. But we also enjoyed the beautiful countryside- riding beside lakes and rivers, watching eagles soar above us, smelling the perfume of the Mexican mock orange bushes which grew wild in profusion alongside the road and hearing the ever-present birdsong as we cycled through the forests.

The eleven days passed quickly. As we neared Nelson through a heavy downpour and thunderstorm, I reflected why I enjoy cycling so much.

The camaraderie, fun and great health we all enjoy are some of the many reasons why I cycle and cycle and cycle… Thank you all for a memorable trip- you are all what made it so special.

See a 2019 Selkirk Loop Tour Google Photos Group Web Album with captions at the link below. Photos in the album were taken by a number of our group’s cyclists.

Full link here: https://photos.app.goo.gl/ctFHjgg2q2unhMES6 – please copy and paste in to your browser.