First, a bit of history: Past Hub & Spokes in Victoria have always been well-attended with 50-80 riders. Organizers planned for that number again for 2020. COVID-19 necessitated cancelling and revising for yet-unknown restrictions for 2021. Therefore, it was suggested offering two Hub & Spokes on consecutive weeks to enable as many out-of-towners as possible. As it turned out, restrictions were lifted just before the events, but it was too late to change plans. 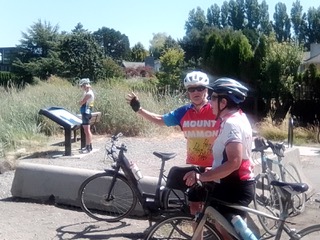 Fourteen riders attended each of the Hub & Spokes. US members had to cancel due to the continued border closure. The fun began at a spontaneous Meet & Greets in the Pub at the James Bay Inn. During the first week, most riders had dinner at the Bard & Banker Pub or Spinnaker’s. The second week ended with a spontaneous Farewell Dinner at James Bay Pub.

During both weeks, the weather was mostly clear with westerly winds. The wind kept the smoke from the BC wildfires away which was especially appreciated by the folks from the Interior who had been suffering there from the smoke. During the first week, two-thirds of the riders had e-bikes; the second week there were only two. 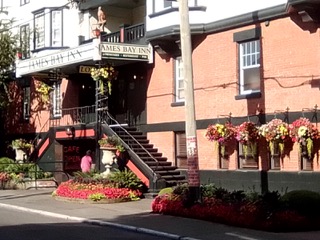 There were two rides offered each day. However, the most popular rides were the intermediate/fast rides. On Monday evening Alex Laird opened each week’s event by offering a short and well-attended city ride. The Tuesday tour to Pedder Bay Marina was mostly along the Galloping Goose & E&N trails with lunch on the patio overlooking a picturesque bay. Brief stops were included at the Songhees Wellness Centre, Spinnaker’s, Canada’s oldest brew pub, International (mega-yacht) Marina and the new “Blue Bridge” lifting mechanism. Wednesday most riders rode through the Saanich Peninsula; lunch was at Elk Lake. This area has a lot of family-run farms, some of which have been in existence for 150 years. A few riders decided to visit the Westshore area for a leisurely ride.

The first Thursday rides were along Victoria’s interesting waterfront. Riders passed by some stately homes through Oak Bay; lunches were at the Oak Bay Marina and at the Oak Bay Beach Hotel both with charming water views. During the second H&S, some riders chose a leisurely ride through quiet city streets. On Friday Allen Olsen closed each week by offering a well-attended early morning ride. Folks just couldn’t seem to get enough riding. Everyone seemed to enjoy their stay at the James Bay Inn located near the city core and harbour.

I want to thank the following leaders for their generous help in making the Hub & Spoke rides a success: Allen and ilka Olsen, Jean MacDonald, John Ward, Don Mais, Mikkel Bonner and Alex Laird. As well, a thank you to all who attended and who seemed to enjoy the sights, riding and milder weather of Greater Victoria. The organizers send best healing wishes to the member who missed the rides due to three ER visits to deal with a painful kidney stone.